Schalbach is a village 12 kilometres north-east of Sarre-Cowig. The Roman Catholic Cemetery is on the northern side of the village, on the road to Veckerswiller.

​Near the north-eastern wall are the graves of 7 airmen who belonged to the Royal Air Force.

The following Airmen were in 156 Squadron, Royal Air Force Volunteer Reserve and killed on 24th February 1944.

1500726 Sergeant Samuel Hopkinson, aged 21. Son of Samuel and Susannah Hopkinson, of Darcy Lever, Bolton, Lancashire. His headstone bears the inscription "He Died That We Might Live"

1322324 Flight Sergeant Leonard Charles Pillinger, aged 22. Son of Herbert George and Clara Alice Pillinger of Bristol; husband of Evelyne May Pillinger. His headstone bears the inscription "At The Going Down Of The Sun And In The Morning We Will Remember" 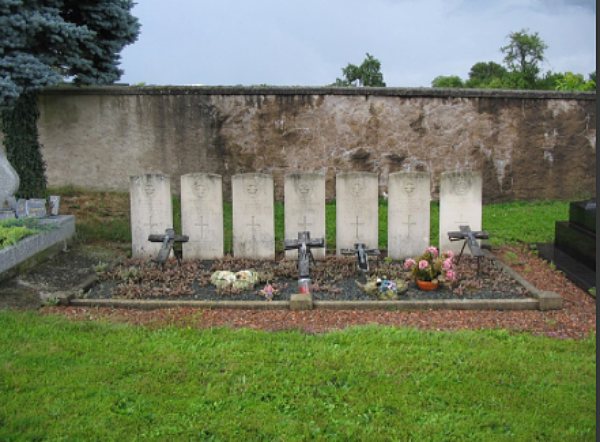