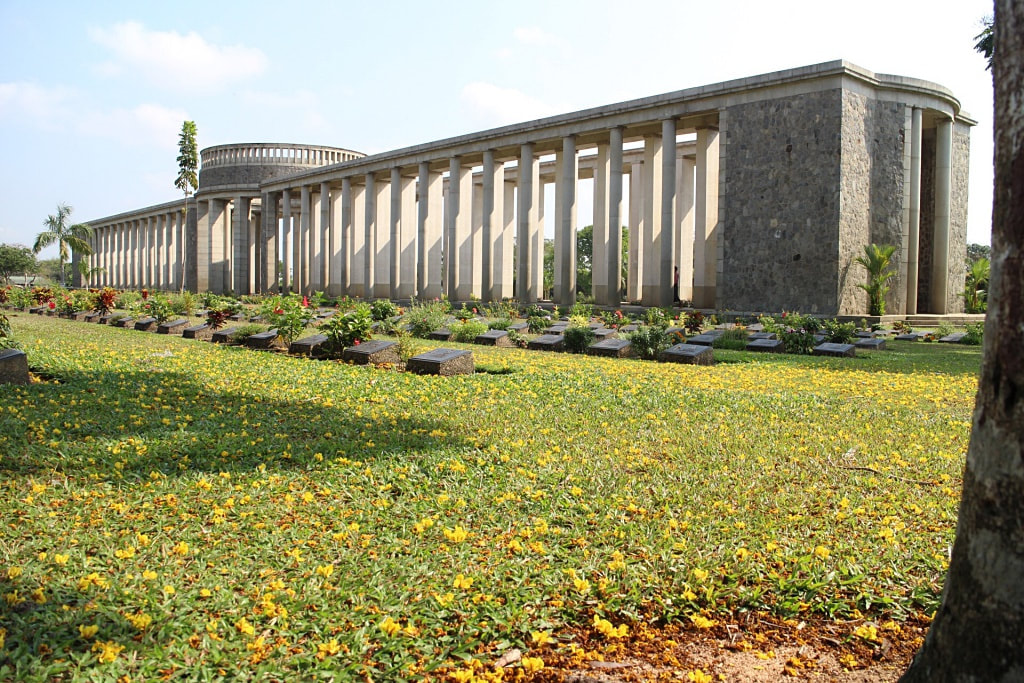 The RANGOON MEMORIAL bears the names of almost 27,000 men of the Commonwealth land forces who died during the campaigns in Burma (now Myanmar) and who have no known grave.

The memorial stands in TAUKKYAN WAR CEMETERY, which is the largest of the three war cemeteries in Burma. It was begun in 1951 for the reception of graves from four battlefield cemeteries at Akyab, Mandalay, Meiktila and Sahmaw, which were difficult to access and could not be maintained. The last was an original 'Chindit' cemetery containing many of those who died in the battle for Myitkyina. The graves have been grouped together at Taukkyan to preserve the individuality of these battlefield cemeteries.

The cemetery now contains 6,374 Commonwealth burials of the Second World War, 867 of them unidentified.

In the 1950s, the graves of 52 Commonwealth servicemen of the First World War were brought into the cemetery from the following cemeteries where permanent maintenance was not possible:- Henzada(1); Meiktila Cantonment(8); Thayetmyo New(5); Thamakan(4); Mandalay Military(12) and Maymyo Cantonment(22).

The TAUKKYAN CREMATION MEMORIAL, which commemorates more than 1,000 Second World War casualties whose remains were cremated in accordance with their faith.

The TAUKKYAN MEMORIAL, which commemorates 46 servicemen of both wars who died and were buried elsewhere in Burma, but whose graves could not be maintained. 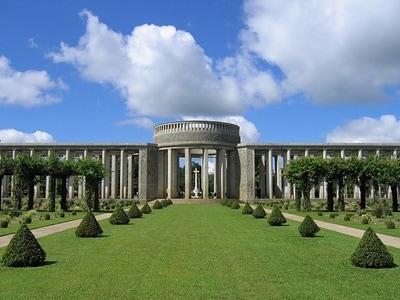 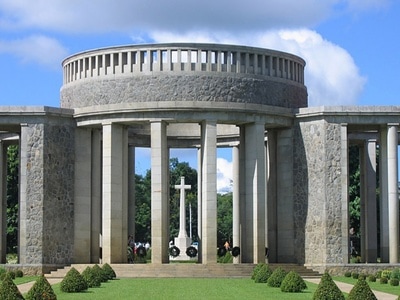 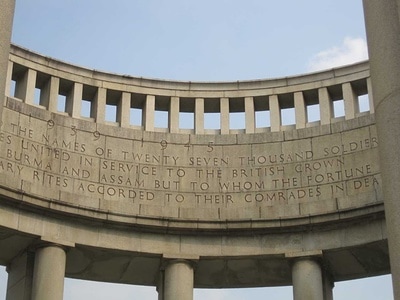 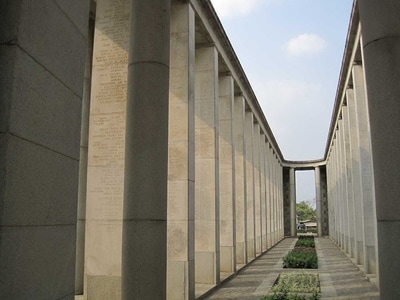 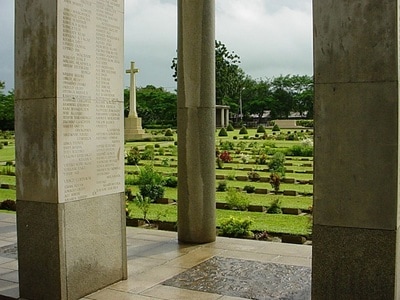 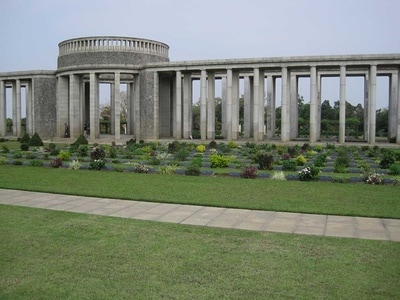 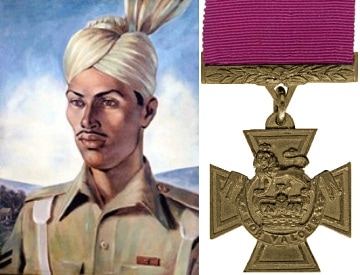 The citation in the London Gazette of 24th May, 1945, gives the following details : In Burma, on 2nd March, 1945, Naik Fazl Din commanded a section during a company attack on a Japanese bunkered position. His section was held up by machine-gun fire and grenades from several bunkers. Unhesitatingly he attacked the nearest position with grenades and silenced it; but as he led his men against the others, six Japanese soldiers rushed from a house near by, led by two officers wielding swords. The section Bren gunner shot one officer and another Japanese soldier, but was killed by the second officer, who next ran his sword through Naik Fazl Din. Despite this terrible wound Naik Fazl Din, seized the sword from the Japanese officer and killed him with it - he killed two more Japanese soldiers, and encouraged his section before staggering to his platoon headquarters to report. He collapsed there, and died soon after reaching the Regimental Aid Post. His action was seen by almost the whole platoon, who, inspired by his gallantry and taking advantage of the bewilderment created among the enemy by the loss of their leaders, continued the attack and destroyed the Japanese garrison. The supreme devotion to duty of this gallant N.C.O. even when fatally wounded, his presence of mind and outstanding courage, can seldom have been equalled, and reflect his unquenchable spirit. 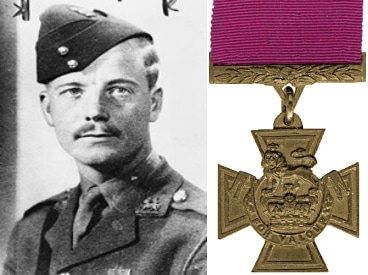 The citation in the London Gazette of 30th March, 1944, gives the following details: At Kyauchaw, in Burma, on 18th January, 1944, Lieutenant Horwood with his forward mortar observation post accompanied the forward company of the Northamptonshire Regt. into action against a Japanese defended locality. Throughout that day he lay in an exposed position under intense fire and effectively shot his own mortars and those of a half-troop of another unit, returning at night with valuable information about the enemy. The following day he moved forward with another company, and from an observasion post which he established on a precipitous ridge, directed accurate mortar fire in support of two attacks. He also deliberately drew enemy fire upon himself, so that the fresh company he was with could see the Japanese positions. That night he remained on the ridge, and on the morning of 20th January again directed mortar fire in support of an attack. In the afternoon, while leading another attack, he was mortally wounded at point-blank range. Lieutenant Horwood set the highest example of bravery and devotion to duty, to which all ranks responded magnificently. His cool calculated actions during these three days, coupled with his bravery, very largely contributed to the ultimate success of the operation and the capture on 24th January of the Japanese position. 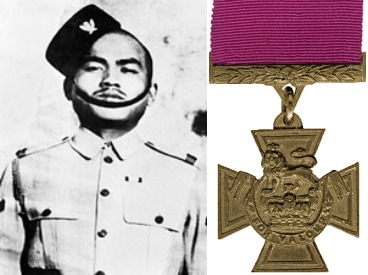 
Son of Haimatisara; husband of Naina, of Rabu, Nepal.


Citation: The citation in the London Gazette of 10th October, 1944, gives the following details: Subadar Netra Bahadur Thapa on 25th June, 1944, was in command of the garrison of 41 men of the 2/5th Royal Gurkha Rifles which held an isolated piquet on a hillside commanding the Base at Bishenpur in Burma. This post was commanded by another which had been overrun by the enemy the previous night, and its retention was vital to the safety of other posts farther down the ridge, and of Bishenpur itself. In the evening a Japanese attack began, and a fierce fight ensued, in which the enemy were driven back with disproportionate losses. Subadar Netra Bahadur Thapa moved from post to post regardless of his own safety, encouraging his men and tending the wounded. After a short lull, the Japanese forces attacked again, from a different direction. The Gurkhas held their ground until by ill-luck both machine-guns of one section jammed, and the enemy overran both this and another section, killing 12 out of the 16 men. The Subadar, having no reserve himself went forward and stemmed any further advance with grenades. Although the situation was critical, he determined to hold on. Another section of 8 men with additional ammunition was sent to reinforce him; all these men were soon casualties, but the Subadar himself retrieved the ammunition, and with his platoon headquarters took the offensive, armed with grenades and kukris. Whilst so doing he received first a bullet wound in the mouth, then was killed by a grenade. His fine example of personal bravery and his high sense of duty so inspired his men that a vital position was held to the limit of human endurance. 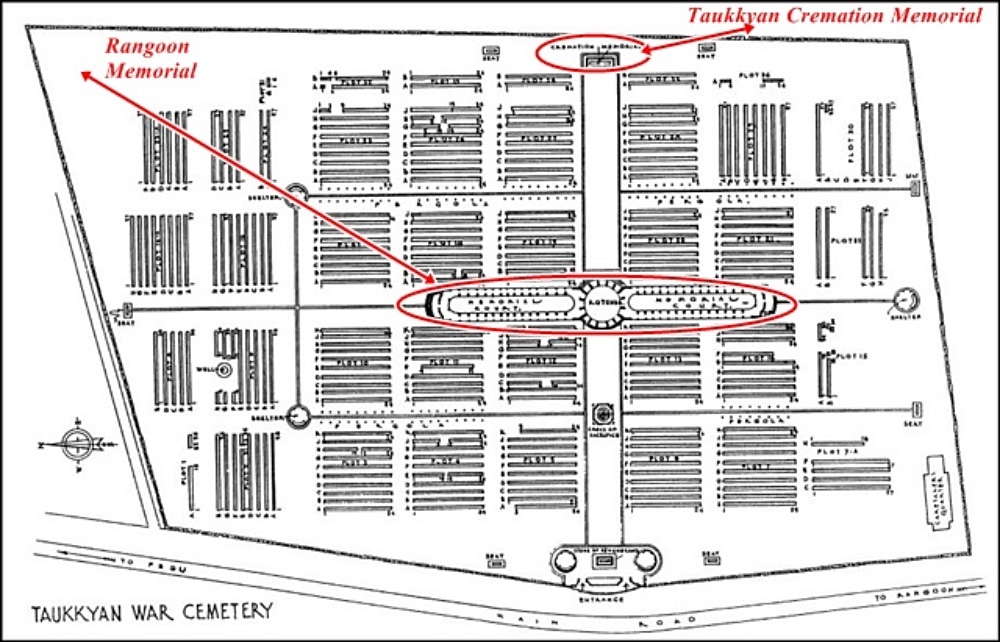 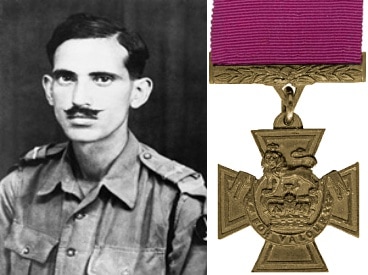 ​The London Gazette of 27th April, 1945. gives the following particulars in the citation: At Kanlan Ywathit, in Burma, on the night of 16th/17th February, 1945, Jemadar Prakash Singh was in command of a platoon of a rifle company occupying a company defended locality. An hour before midnight the Japanese launched a series of fierce attacks, the main weight of which was directed against Jemadar Prakash Singh's platoon. Within the first half hour, he was severely wounded and was unable to walk. His company commander ordered him to be relieved, but a short time afterwards his relief was wounded, and he crawled forward and again took command of his platoon sector. In turn he fired the platoon's 2-inch mortar, the crew of which had been killed, and the machine-gun belonging to a section all of whom were casualties. At this stage he was once more badly wounded in both legs, but continued to drag himself about by his hands. He re-grouped the remnants of his platoon around him so that they successfully held up a fierce Japanese charge. Nearly three hours after the Japanese attacks began, Jemadar Prakash Singh was wounded for the third time in the right leg, but though so weak from loss of blood that he could not move and was obviously dying, he continued to direct and encourage his men, and so inspired the company that the enemy were finally driven out from the position. 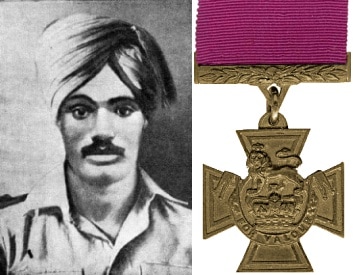 ​The citation in the London Gazette of 8th February, 1945, gives the following details: In Burma on 25th October, 1944, two platoons of the 1st Punjab Regiment were ordered to attack an enemy position. This was defended by a large force of fresh Japanese troops and every approach was covered by machine-guns. Subadar Ram Sarup Singh's platoon charged the position and the enemy fled, suffering casualties in their retreat. Subadar Ram Sarup Singh led a bayonet charge against a strong counter-attack, killing four of the enemy himself and checking the rest. Although badly wounded he went on again shouting encouragement to his men till finally he was mortally wounded by machine-gun fire. It would be difficult to find a finer example of cool bravery, leadership and determination. His action had a profound effect on the rest of the company, and when volunteers were called for to bring in his body, under the heaviest fire, the entire company responded. Subadar Ram Sarup Singh's gallantry will inspire the Regiment for all time. 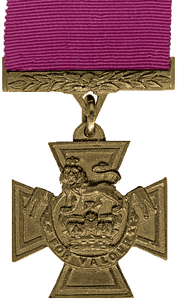 Son of Barkhurdar and Makda; husband of Mehr Bhari, of Chakrala, Mianwali, Pakistan.

The citation in the London Gazette for 4th May, 1945, gives the following particulars: In Burma, on the night 19th/20th January, 1945, at Kyeyebin, Kaladan, Lance-Naik Sher Shah was commanding the left forward section of his platoon, when a Japanese platoon attacked his post. He by himself stalked the enemy from their rear and broke up the attack by firing into their midst, killing the platoon commander and six others. Soon after midnight the Japanese, now reinforced, started to form up for another attack. Again he crawled forward alone, and finding a group of Japanese officers and men, fired until they broke up in disorder. On his way back he was hit by a mortar bomb, but made light of his wound; not till some time later did his comrades find out that his right leg was missing. A third time the Japanese troops started to form up for an attack, and for the third time Lance-Naik Sher Shah, despite his wounds and loss of blood, crawled forward and broke up the enemy by firing among them. This time he received a head wound which proved fatal. His initiative and indomitable courage throughout this very critical situation undoubtedly averted the overrunning of his platoon and was the deciding factor in defeating the Japanese attacks.
Pictures in gallery below © André De Smet 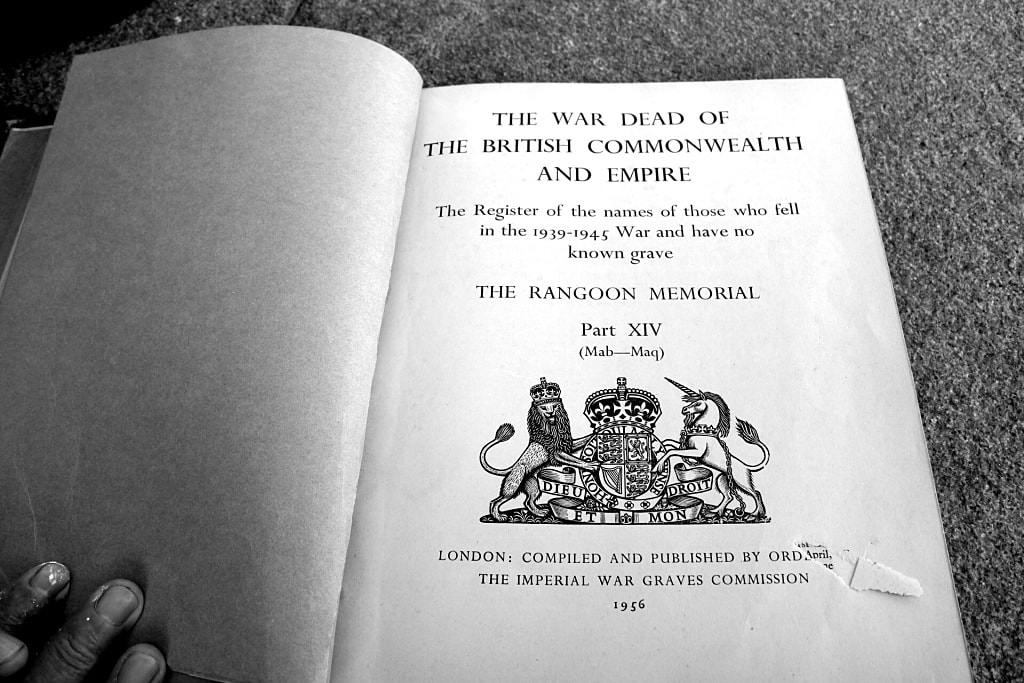 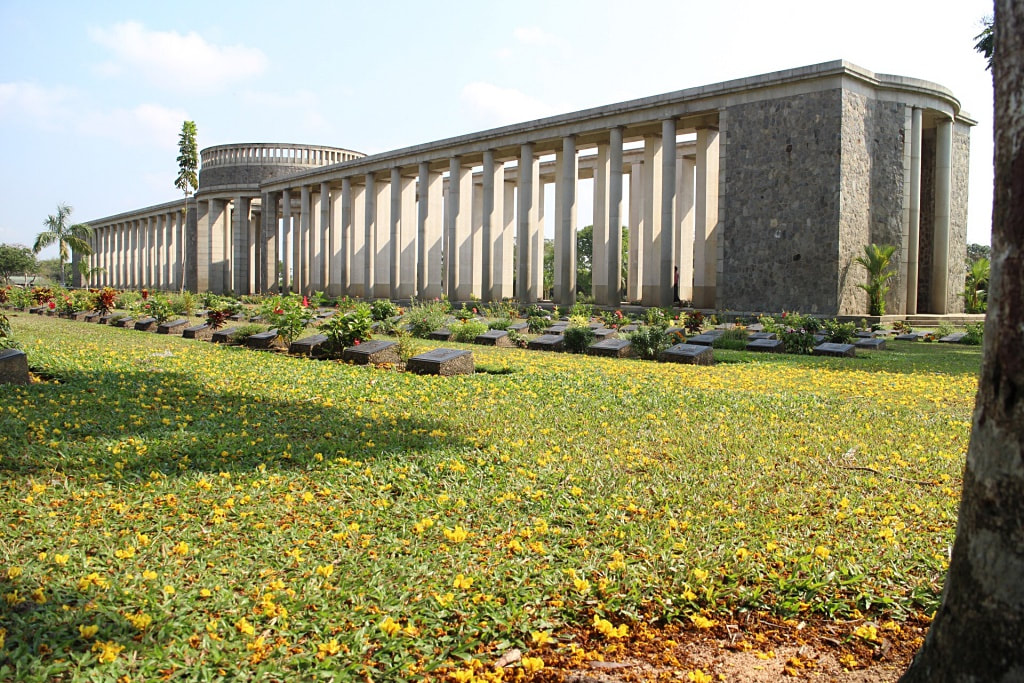