St Agnan is a village and commune 30 kilometres east-south-east of Fontainebleau, and 20 kilometres north-west of Sens. The Cemetery is on the north side of the village on a minor road leading north (direction of Villeneuve-la-Guyard) from the church. There are 5 Commonwealth war graves of the 1939-1945 war buried in a plot to the right of the entrance.

Take off 21.52 Kelstern. Part of a force of 360 aircraft – 346 Lancasters, 14 Mosquitoes, tasked to attack the German military camp situated close to the French village of Mailly. Two master bombers were used to control the raid; the first “Market Leader” assessed the initial target marking to be accurate and transmitted this to the “Main Force Controller” and advised that the main force bomber should come in to bomb. However, “Main Force Controller’s” VHF radio could not transmit as it had been incorrectly tuned and was being drowned out by an American forces broadcast.
The main force by this time had arrived on schedule and began to circle awaiting the “Main Force Controller’s” order to bomb, which he could not transmit. Finally, the “Deputy Main Force Controller” took over the raid and accurate bombing was attained and resulted in heavy damage. The delay however, gave adequate time for the German night-fighters to arrive and combats began even as the force was circling, and that continued along the homebound leg. 42 aircraft, 11.6% of the force was lost (42 Lancasters). While returning to base the aircraft was shot down and crashed at St-Agnan, Yonne, approximately 20km NW of Sens. Those of the crew who died are buried in the St-Agnan Communal cemetery.

The Navigator and Bomb Aimer are in a joint grave with separate headstones.


Pictures of Cemetery and Memorial © Barry Cuttell and Yvonne Kinsella INSCRIPTION. AT THE GOING DOWN OF THE SUN AND IN THE MORNING WE WILL REMEMBER THEM. 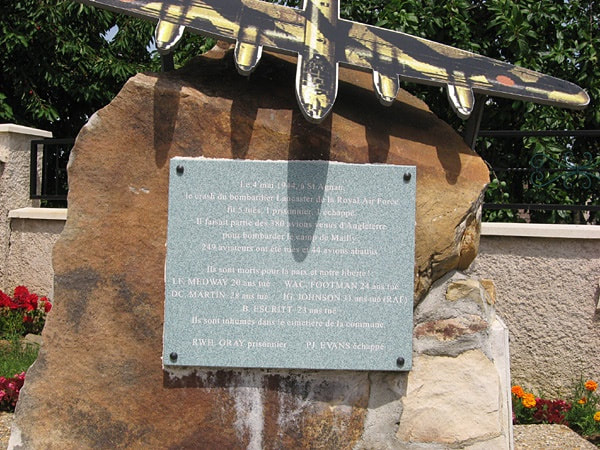