Beck Row is a village two miles north-west of Mildenhall, along the A1107 to Littleport.

There is one 1914-18 war grave in the churchyard and 77 war graves of the 1939-45 war, all except one having served with the air forces of the Commonwealth. All the airmen are buried in a war graves plot set aside for casualties from the nearby airfield at Mildenhall during the Second World War. Five of the airmen are unidentified. 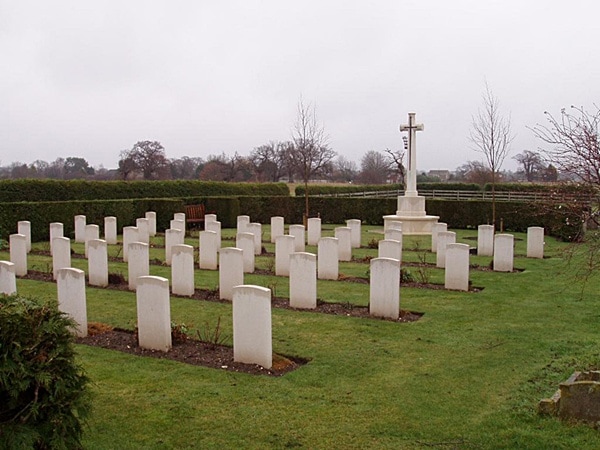 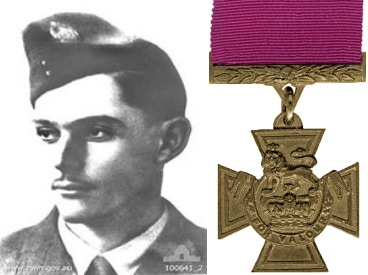 
Citation: The following details are given in the London Gazette of 12 January, 1943. Flight Sergeant R. H. Middleton was captain and first pilot of a Stirling aircraft detailed to attack the Fiat Works in Turin one night in November, 1942. Very difficult flying conditions, necessitating three low altitude flights to identify the target, led to excessive petrol consumption, leaving barely sufficient fuel for the return journey. Before the bombs could be released the aircraft was damaged by anti-aircraft fire and a splinter from a shell which burst in the cockpit wounded both the pilots and the wireless officer. Flight Sergeant Middleton's right eye was destroyed and the bone above it exposed. He became unconscious and the aircraft dived to 800 ft. before control was regained by the second pilot, who took the aircraft up to I, 500 ft. and released the bombs, the aircraft meanwhile being hit many times by light flack. On recovering consciousness Flight Sergeant Middleton again took the controls and expressed his intention of trying to make the English coast, so that his crew could leave the aircraft by parachute. After four hours the badly damaged aircraft reached the French coast and there was once more engaged and hit by anti-aircraft fire. After crossing the Channel Flight Sergeant Middleton ordered the crew to abandon the aircraft. Five left safely, but the front gunner and the flight engineer remained to assist the pilot, and perished with him when the aircraft crashed into the sea. Flight Sergeant Middleton was determined to attack the target regardless of consequences and not to allow the crew to fall into enemy hands. While all the crew displayed heroism of a high order, the urge to do so came from Flight Sergeant Middleton, whose fortitude and strength of will made possible the completion of the mission. His devotion to duty in the face of overwhelming odds is unsurpassed in the annals of the Royal Air Force.