The Memorial is situated on the Mersey River Front at the Pier Head, Liverpool, close to and behind the Liver Buildings and the end of James Street.

From the end of the M62 motorway follow the signs for the City Centre and Maritime Museum.

Following the redevelopment of the area around the Liverpool Naval Memorial, there is now no parking except for service vehicles. Public access is now only for visitors on foot but ramps and kerbs do allow wheelchair access into the area.

At the outbreak of the Second World War, it was evident that the Royal Navy would not be able to man all the auxiliary vessels that would serve with it. To deal with the shortfall in manpower, a number of officers and men of the Merchant Navy agreed to serve with the Royal Navy under the terms of a T.124 agreement, which made them subject to Naval discipline while generally retaining their Merchant Navy rates of pay and other conditions. The manning port established to administer these men was at Liverpool.

More than 13,000 seamen served under these conditions in various types of auxiliary vessels, at first mainly in armed merchant cruisers, but also in armed boarding vessels, cable ships, rescue tugs, and others on special service.

The Liverpool Naval Memorial commemorates 1,400 of these officers and men, who died on active service aboard more than 120 ships, and who have no grave but the sea.

The great majority of Merchant Navy men, who did not serve with the Navy, but with merchant ships, are commemorated on the Merchant Navy Memorial, at Tower Hill in London. 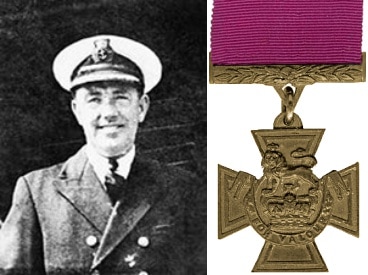 Son of William and Esther Wilkinson, of Widnes, Lancashire.


Citation: The citation in the London Gazette of 13th December 1946 contains the following details : On 14th February, 1942, H.M.S. Li Wo, a patrol vessel of 1,000 tons, formerly a passenger steamer on the Yangtse River, was on passage from Singapore to Batavia. Her company consisted of eighty-four officers and men, mainly survivors from H.M. ships and Army and Air Force units. Her armament was one 4-inch gun (with 13 practice shells) and two machine-guns. Since leaving Singapore she had beaten off four air attacks and had suffered considerable damage. Late in the afternoon she sighted two enemy convoys, the larger being escorted by Japanese fleet units, including a heavy cruiser and some destroyers. Lieutenant Wilkinson, with the unanimous backing of his mixed company, decided to engage the convoy and to fight to the last, inflicting what damage he could. He knew that his ship faced certain destruction. In the action that followed the machine-guns were used effectively, and a volunteer gun-crew fought the 4-inch gun to such purpose that they hit and set on fire a Japanese transport. After a little more than an hour, H.M.S. Li Wo was critically damaged and was sinking. Lieutenant Wilkinson decided to ram the damaged transport. It is known that this ship burned throughout the night and was probably sunk. Having ordered his ship to be abandoned, Lieutenant Wilkinson himself went down with her. Lieutenant Wilkinson's valour was equalled only by the skill with which he fought his ship. The Victoria cross is bestowed upon him posthumously in recognition of the heroism and self-sacrifice displayed not only by himself but by all who fought and died with him.