The cemetery, at Norbiton, was begun in 1854, and now covers 25 acres. It belongs to the Kingston Joint Burial Committee, serving Kingston, New Malden and Coombe. It contains scattered War Graves and a War Cross is erected facing the main entrance. 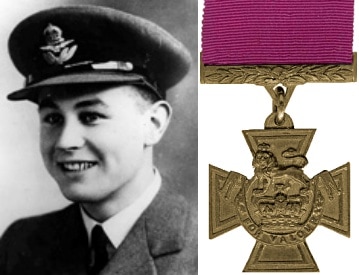 
Citation: The following details are given in the London Gazette of June 23rd 1944 : On the night of March 30th 1944 Flying Officer Barton was captain and pilot of a Halifax Aircraft attacking Nuremburg which was severely damaged by the enemy en route, one engine, the machine gun and the inter- communication system being put out of action. The navigator, air bomber and wireless operator, mis-interpreting a signal left the aircraft by parachute. Although in great peril in a damaged plane and without navigational aid, Flying Officer Barton completed his mission, releasing the bombs on the target himself. Then, despite leakages from the two petrol tanks, for 4 and half hours he flew the crippled plane over heavily defended territory against strong head winds and succeeded in crossing the English coast only 90 miles north of his base, his petrol almost exhausted. Before a suitable landing place could be found the port engine stopped. On the one remaining engine Flying Officer Barton made a valiant attempt to land clear of the houses over which he was flying, but crashed. He lost his life, but the other three members of his crew survived. In gallantly completing his last mission in the face of almost impossible odds this officer displayed unsurpassed courage and devotion to duty.