From the Brompton Barracks Chatham - At the traffic signals turn right onto Globe Lane - A231 (signposted 'Historic Dockyards'). Keep in left hand lane then turn left onto Dock Road (signposted Gillingham). At roundabout take the 2nd exit onto Wood Street - A231 (signposted Gillingham). Turn Right on Mansion Row (The memorial is signposted from here), then 1st left on Sally Port Gardens and finally 1st right on King's Bastion. Follow road through the housing estate, the car park to the memorial is at the end of this road.

The Memorial overlooks the town of Chatham and is approached by a steep path from the Town Hall Gardens.

A copy of the Memorial Register is kept in the Naval Chapel of Brompton Garrison Church and may be consulted there. The keys to the church are held at the Gate House, which is always manned.

A Visitor Information Panel has been installed to provide information about the war casualties commemorated here. This is one of many panels being erected to help raise awareness of First and Second World War casualties in the UK.

Public access limited to the period from 08.30 to 17.00. Should for any reason the Memorial be closed during the stated hours, please telephone the Guard Room at Brompton Barracks on 01634 822442 who will arrange for the gates to be opened. Any inconvenience to visitors is greatly regretted.

An Admiralty committee recommended that the three manning ports in Great Britain - Chatham, Plymouth and Portsmouth - should each have an identical memorial of unmistakable naval form, an obelisk, which would serve as a leading mark for shipping. The memorials were designed by Sir Robert Lorimer, who had already carried out a considerable amount of work for the Commission, with sculpture by Henry Poole. The Chatham Naval Memorial was unveiled by the Prince of Wales (the future King Edward VIII) on 26 April 1924.

After the Second World War it was decided that the naval memorials should be extended to provide space for commemorating the naval dead without graves of that war, but since the three sites were dissimilar, a different architectural treatment was required for each. The architect for the Second World War extension at Chatham was Sir Edward Maufe (who also designed the Air Forces memorial at Runnymede) and the additional sculpture was by Charles Wheeler and William McMillan. The Extension was unveiled by the Duke of Edinburgh on 15 October 1952.

Chatham Naval Memorial commemorates 8,517 sailors of the First World War and 10,098 of the Second World War. 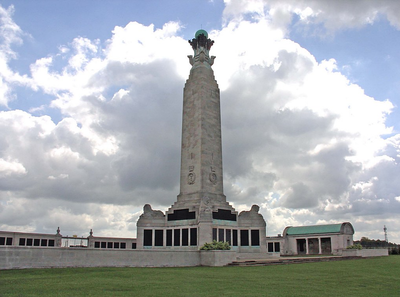 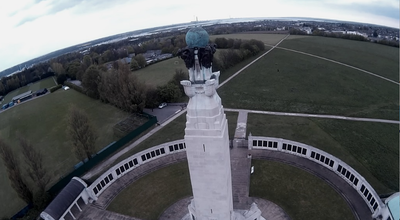 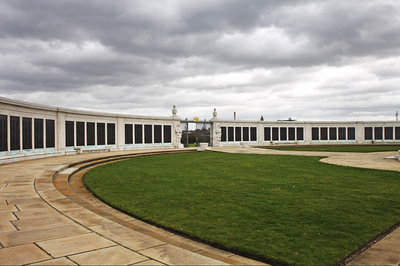 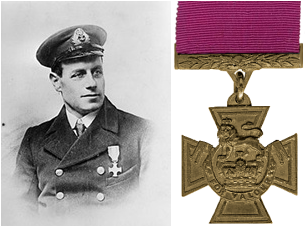 Father of T. W. Crisp, of 41, Stanford St., Lowestoft, Suffolk. The tenor bell at St. Margaret's Church, Lowestoft, is named the "VC Bell" and dedicated to him.


Citation: An extract from the London Gazette, No. 30363, dated 30th Oct., 1917, records the posthumous award of V.C. "For service in action with enemy submarines." 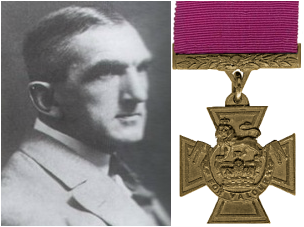 Citation: The citation in the London Gazette for 26th November, 1940, reads: "For valour in challenging hopeless odds and giving his life to save the many ships it was his duty to protect. On the 5th of November, 1940, in heavy seas, Captain Fegen, in His Majesty's Armed Merchant Cruiser Jervis Bay, was escorting thirty-eight Merchantmen. Sighting a powerful German warship he at once drew clear of the Convoy, made straight for the enemy and brought his ship between the raider and her prey, so that they might scatter and escape. Crippled, in flames, unable to reply, for nearly an hour the Jervis Bay held the German's fire. So she went down; but of the Merchantmen all but four or five were saved." 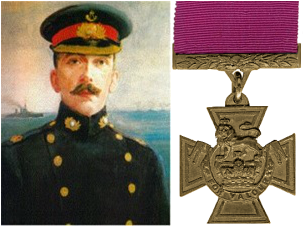 Citation: An extract from "The London Gazette," No. 29751, dated 15th Sept., 1916, records the following:- "Whilst mortally wounded and almost the only survivor after the explosion of an enemy shell in "Q" gunhouse, with great presence of mind and devotion to duty ordered the magazine to be flooded, thereby saving the ship. He died shortly afterwards." 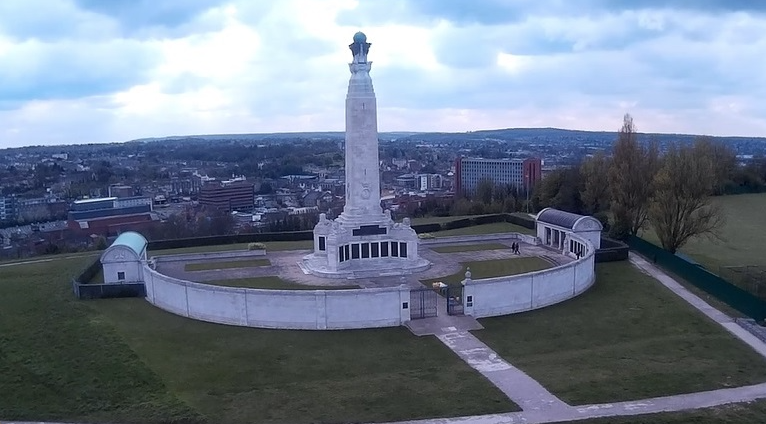 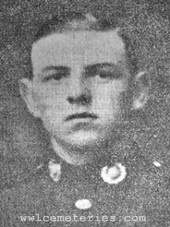 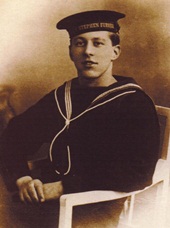 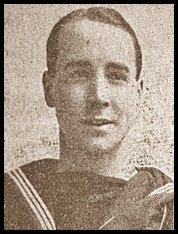 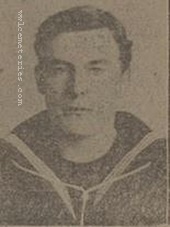 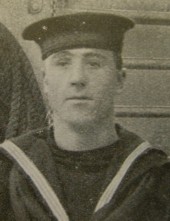 Son of John and Ellen Volze, of Croydon, Surrey. 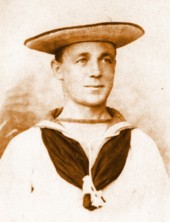 Picture courtesy of Gail Waters, wife of the great grandson of Thomas Waters 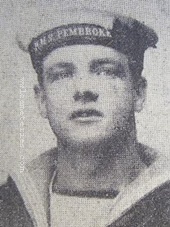 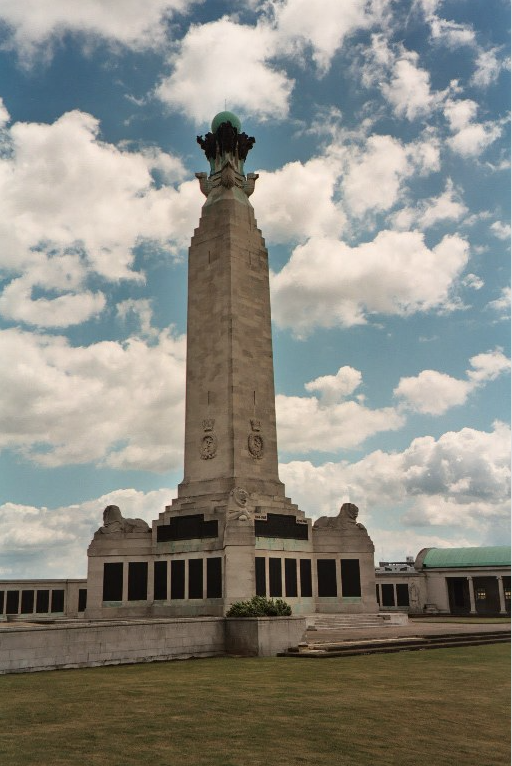 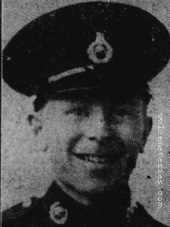 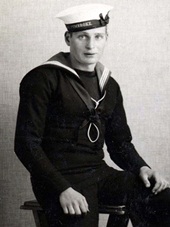 After taking part in the Operation Torch landings of North Africa in November 1942, HMS Avenger departed Gibraltar with convoy MKF 1 on 14th November 1942, heading home to the Clyde in the UK.

At 0305 on Sunday 15th November 1942, she was torpedoed by the German U-boat, U-155 and hit on the port side amidships. This in turn ignited her bomb room, blowing out the centre section of the ship. Her bow and stern sections rose in the air and sunk within 2 minutes in position 36°15'N,07°45'W, leaving only 12 survivors 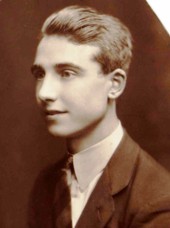 "At 1835, the Hartlebury, dispersed from Convoy PQ-17, was hit by two of three torpedoes fired by U-355 and two minutes later by another torpedo. At 1845, a coup de grâce hit the vessel, which sank over the bow within 10 minutes 17 miles 180° from Britwin Lighthouse, Novaya Zemlya. The first torpedoes had killed six mess attendants and the master had to be freed underneath a piece of debris. The explosions only left one lifeboat intact, which was lowered by panicking crewmen and flipped over, throwing the occupants into the icy water. Others jumped into the water and tried to reach the rafts. A total of 29 crewmembers, seven gunners and two naval signalmen were lost. The master and 12 survivors landed at Pomorski Bay, Novaya Zemlya. Seven survivors made it to the American SS Winston-Salem aground at North Gusini Shoal, Novaya Zemlya, were rescued by a Soviet survey ship and transferred to the British SS Empire Tide at anchor in Pomorski Bay. All survivors were later transferred to HMS La Malouine and landed at Archangel on 25 July. The master, George Willbourne Stephenson, survived the sinking but died of a head trauma within a year." 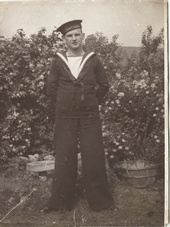 Frank was killed in the Battle of the Java Seas on 27 February 1942. His sister Phyllis Robins mourned her cherished Brother until she died in April 2014, aged 99. 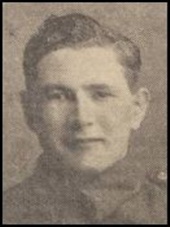