Travel via Car:
Travel via highway A-1303, north of London.

Travel via Train:
Cambridge may be reached by train from the King's Cross and Liverpool Street stations. Travel time is about one hour.

Travel via Airplane:
London is about 60 miles from the cemetery.

Travel via Public Transportation:
Taxis are available at the Cambridge rail station.

Lodging:
Hotels are available in Cambridge.

The Cambridge American Cemetery and Memorial site in England, 30.5 acres in total, was donated by the University of Cambridge. It lies on a slope with the west and south sides framed by woodland. The cemetery contains the remains of 3,812 of our military dead; 5,127 names are recorded on the Tablets of the Missing. Rosettes mark the names of those since recovered and identified. Most died in the Battle of the Atlantic or in the strategic air bombardment of northwest Europe.

From the flagpole platform near the main entrance, the great mall with its reflecting pools stretches eastward. It is from the mall that the wide, sweeping curve of the burial area across the lawn is best appreciated. Along the south side are the Tablets of the Missing, and at the far end is the memorial with a chapel, two huge military maps, stained glass windows bearing the state seals and military decorations, and a mosaic ceiling memorial honoring the dead of our air forces.

A new, 4,000-square-foot center visitor center opened in May 2014. Through interpretive exhibits that incorporate personal stories, photographs, films, and interactive displays, visitors will gain a better understanding of this critical campaign that contributed to the Allied victory in Europe during World War II. 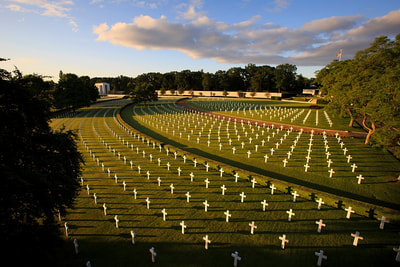 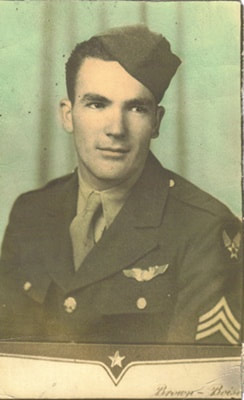 This picture is of 34168544 Staff Sergeant Percy Mathews, 422nd Bomber Squadron, 305th Bomber Group, who died on the 29th May 1943. The information provided by Dana Mathews stated he was originally buried in Escoublac Cuy Communal Cemetery, but having confirmed with the American Battle Monuments Commission, he is entered as being "Missing in Action" and is commemorated on the Tablets of the Missing at Cambridge American Cemetery.
​
Pictures courtesy of Dana Mathews.