Located within the Rockhampton Cemetery, situated on the Bruce Highway. The plot was acquired by the Army in 1943 and contains 36 graves, comprised of one airman of the Royal Air Force, 21 soldiers and 12 airmen of the Australian forces, one Salvation Army member and one Young Men's Christian Association member.
​
During WW2 Rockhampton was host to a number of Allied Forces. Australian troops were stationed in the Rockhampton-Maryborough area in 1941; in 1942 the 41st American Division moved from Melbourne prior to operations in the Solomons and in November 1942 the Commander of the 1st American corps had his headquarters there.


No. of Identified Casualties: 35 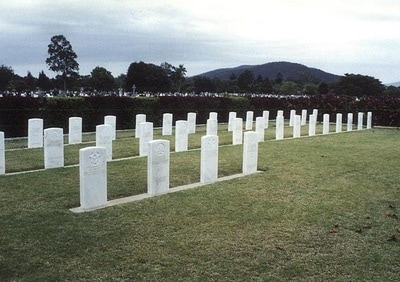