Cairns is a town and seaport on Trinity Bay on the north-eastern coast of Queensland, and is 2,029 kilometres north-west of Brisbane.

Cairns Cemetery is at the end of Martyn Street, off Bruce Highway. It contains a special plot of service war graves. A paved entrance leads into this plot from an internal roadway of the civil cemetery. Immediately to the left of the entrance is a stone seat into the back of which, facing the approach, is set a panel bearing the name " Cairns War Cemetery ". On the right is a stone pier containing a bronze box in which the register is kept. Opposite the entrance stands the Cross of Sacrifice.
​

After the first Japanese raid on Darwin, on 19 February 1942, a shuttle service of small merchant ships between Cairns and Darwin was introduced. Cairns was also an important air base, from which two Catalina General Reconnaissance Bomber Squadrons (Nos. 11 and 20) operated. 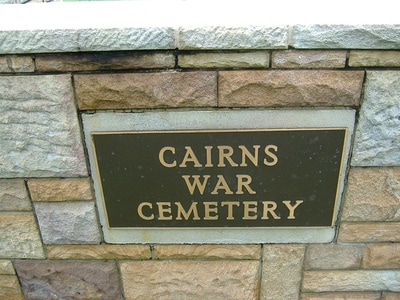 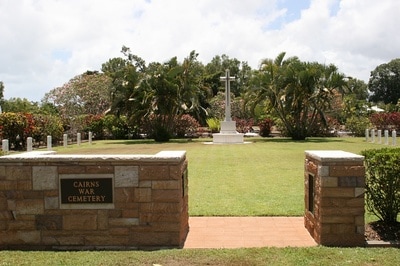 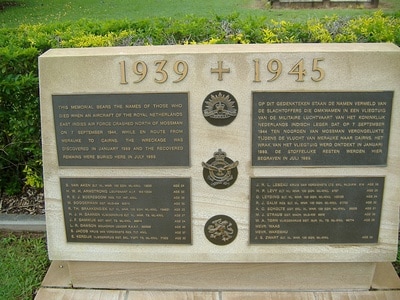 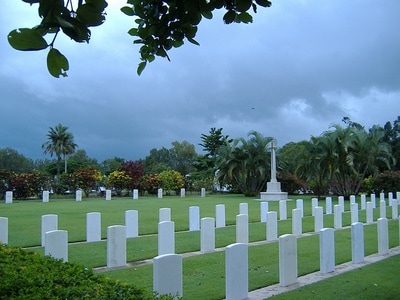 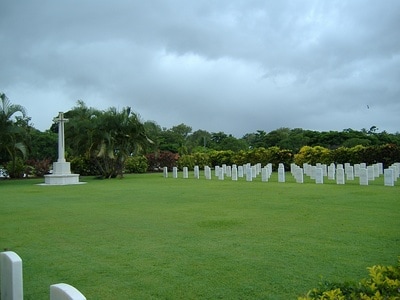 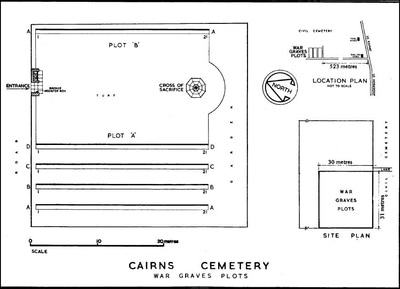 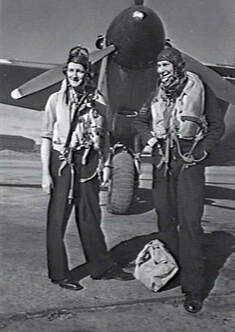 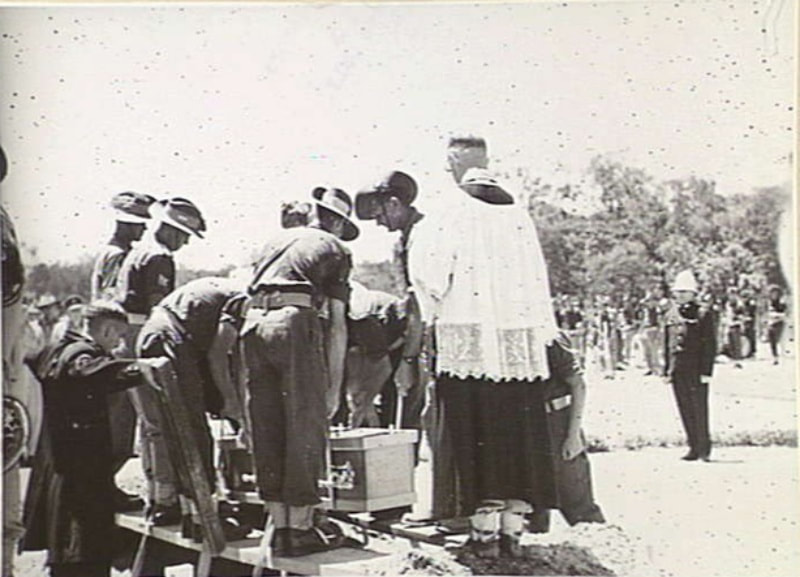 The Funeral at Cairns of Major General George Alan Vasey, Major General R. M. Downes and Lieutenant Colonel George Anthony Bertram who died in a Military Air Crash. Vasey and Bertram are buried in this cemetery. 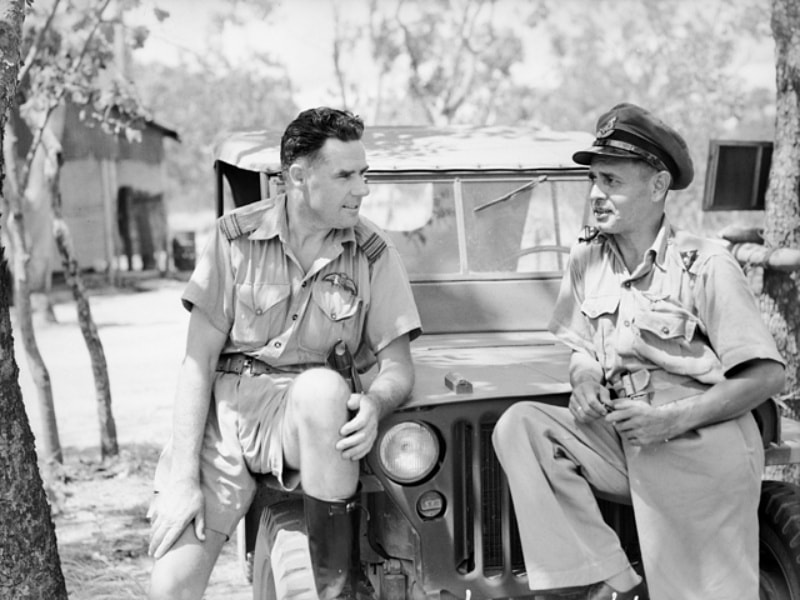 Leaning against the front end of a Jeep are 260968 Squadron Leader Leslie Roy Dawson (left), late of Headquarters, RAAF (NEI) Melbourne, and Lieutenant Colonel B S Fiedeldij (right), of the Dutch Army, Netherlands East Indies (NEI). They are having a discussion on the base of the composite 18 Squadron (NEI), RAAF which is equipped with Dutch B-25 Mitchell bombers. Squadron Leader Dawson was accidentally killed on 7 September, 1944 while on operations off Cairns, Queensland. He is buried in the Cairns cemetery. 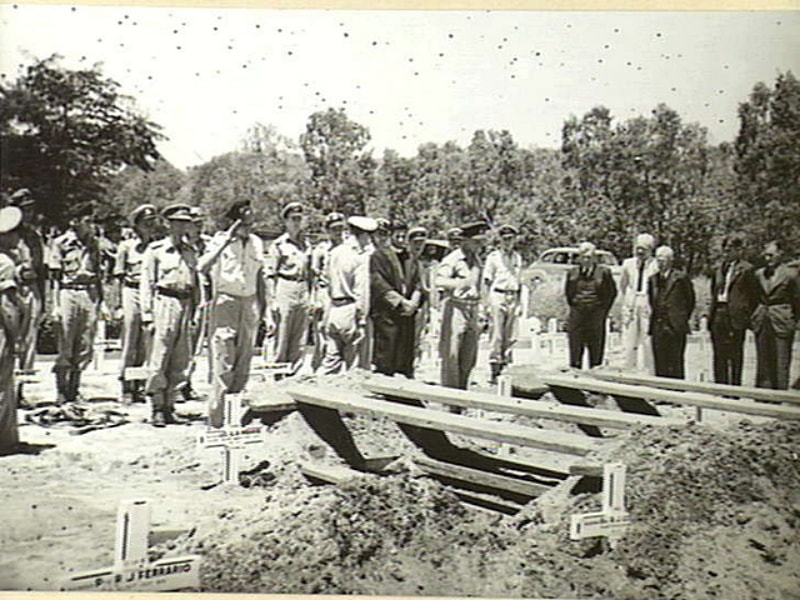 RAAF officers and other ranks paying their final respects alongside the graves of 409400 Warrant Officer Berrol Samuel Frieze and 404543 Flight Lieutenant John William Newell. Both servicemen were killed in an accident as passengers in the crash of Lockheed Hudson aircraft A16-118 off of Cairns Queensland on 5 March, 1945. The Jewish burial service was read by NX77338 Captain Lynn Harvey Joseph, Medical Officer, Headquarters 1 Corps 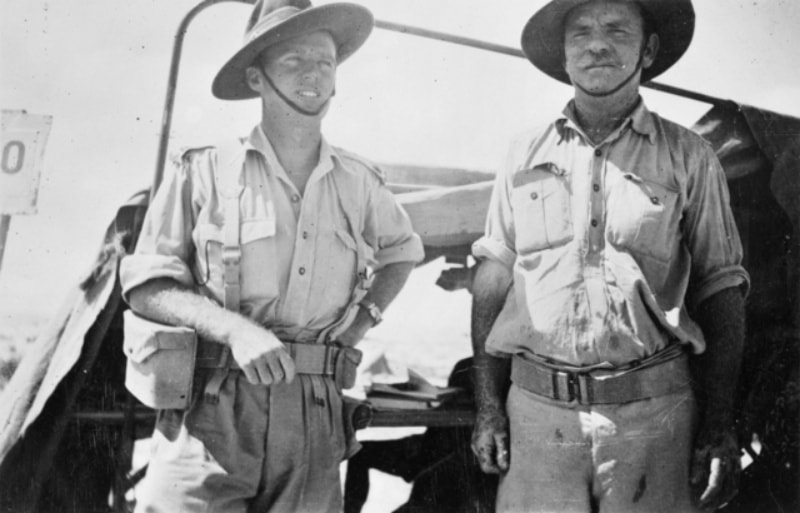 Informal portrait of QX6222 Major (Maj) Bruce Dowsett Strange, 2/5th Battalion, (left) and his unidentified driver. Maj Strange was awarded the Distinguished Service Order (DSO) for his 'utmost vigour, aggressive spirit and initiative' on 28 October 1942. He later died in Queensland on 20 September 1944, and is buried in the Cairns War Cemetery. 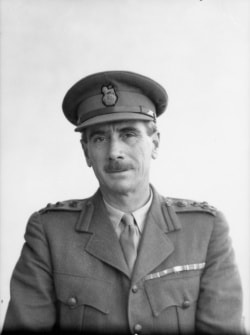