This cemetery is high up in the mountains between Oporto and Lisbon, in the village of Loriga. The village is 20 kilometres from the nearest city of Seia.

There is a bus service (Express Loriga or Express S. Romão; www.rede-expressos.pt) from Lisbon airport, a distance of 292 kilometres from Loriga. It is also possible to take a taxi or a bus from Seia to Loriga.

From the direction of Oporto approximately 1 km before the town boundary there is a sign to the right Santuario N. S. de Guia. Follow this road and before the sanctuary is the cemetery. The owner of the bar in the main square of the town speaks English.

Loriga Cemetery is only open on Saturdays, Sundays and Public Holidays from 8am to 5pm.

In the cemetery are the graves of six Commonwealth airmen. They were the crew of a Hudson bomber of the South African Air Force and their two R.A.F. passengers, and were killed on 22 February 1944 when their aircraft failed to clear the 1,820 metres eastern wall of the Serra da Estrela at the Penta da Gato.

When the headstones had been erected on the graves a service of dedication was held, conducted by the chaplain of the English Church at Oporto. It was attended by members of the British Embassy, Lisbon, a considerable party of British war veterans and almost the whole population of Loriga. 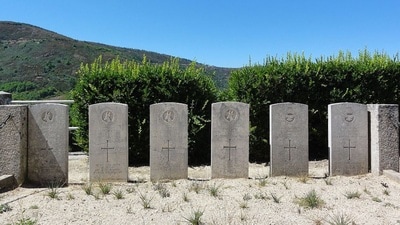