The German military cemetery is located to the west of the road Latina – Rome, at the SS 148, the Via Pontina, approx. 26 kilometres to the southeast of Rome. On the horizon you can see the Mountains of Albania. In the south you can see the former battle field of Aprilia and then the coastal plain of the drained Pontine Marshes. During heavy fighting at the beachhead of Anzio-Nettuno the Americans established a big military cemetery for friends and enemies at the northern exit of the city of Nettuno. In early 1947 2,740 German war victims who had been buried there were moved to Pomezia at the instigation of the American grave service, since the ground of Pomezia was more suitable for a permanent war gravesite. In December 1946 the piece of land was made available by the Italian state free of charge.

By request and with the support of the general police station of that time, 3,751 German war victims could be recovered from field graves of the former beachhead Anio-Nettuno by the German grave service. Afterwards they were buried at Pomezia. In the years 1948 – 1955 the Volksbund buried a further
​
10,704 German war victims here coming from the municipal cemeteries of the provinces of Rome, Latina, Avellino, Frosinone, L´Aquila, Chieti, Siena and Pistoia. After the conclusion of the German-Italian War Graves Agreement of 22nd December 1955, German war victims from the provinces of Ancona, Arezzo, Ascoli, Grosseto, Latina, Livorno, Macerata, Naples, Perugia, Pesaro, Rieti, Rome, Siena, Terni, Viterbo and Reggio di Calabria were also moved to the cemetery at Pomezia. Altogether 27,500 German soldiers have found their final resting place at Pomezia. The expansion of the military cemetery was carried out until the end of the fifties according to the plans of the Site Manage ment of the Volksbund. If you leave the entrance building you follow a straight path with paving stones. You pass the grave fields and reach the central monument, which was built over the tomb of the companion’s grave. Four strong columns support a canopy, the bottom of which is covered with mosaics. The central column has the form of a sculpture: four huge soldiers and family members. The grave fields with crosses of natural stone are surrounded by groups of pines. The cemetery was opened to the public on 6th May 1960. 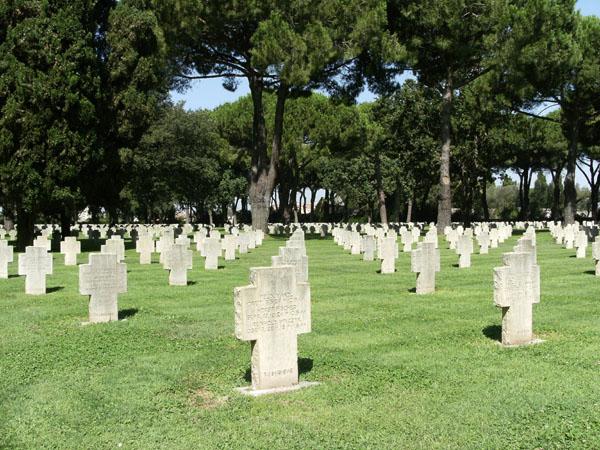