Rabaul lies on Blanche Bay inside the hook-nosed north-eastern tip of the Gazelle Peninsula of New Britain, the largest and most important island of the Bismarck Archipelago.

Between 1884 and 1914, New Britain was known as New Pomerania and part of German New Guinea. On the 11th September 1914, in one of Australia's first actions of the 1914-18 war, its troops seized the German wireless station at Bitapaka near Rabaul. After the war, the island became part of the Territory of New Guinea, which was an Australian mandated territory. The site of the wireless station later became the War Cemetery.

In January 1942, after three weeks of air bombardment, Rabaul was attacked by the Japanese from the sea, and overwhelming odds soon broke the defence. It is estimated that against the original garrison of 1,400 the Japanese landed 17,000 men in the immediate vicinity of Rabaul. The defenders split into small groups and while some 400 managed to escape by sea a great number were killed or captured. Of the latter, some 160 were murdered by the Japanese near Tol in February, whilst most of the remainder, plus some 200 civilians, were drowned when the ship, the Montevideo Maru, was torpedoed and sunk whilst moving them to the Philippines. Nevertheless a number of the original garrison ran the gauntlet of the Japanese patrol and reached Australian territory in small vessels, overlooked when the Japanese commander sent destroyers steaming up and down the coast smashing all the boats to be found.

Small forces on New Ireland, which lies near and north-north-east of New Britain, had been attacked and overwhelmed on January 21st, 1942. It was not until November 1944 that New Britain was again the scene of fighting, when the 5th Australian Division landed at Jacquinot Bay, and the 11th Division at Wide Bay. The two Divisions cleared the north and south coasts and bottled up the enemy in the Gazelle Peninsula. Here the Japanese were contained until the final surrender in August 1945, when the number of their troops was found to be nearly 90,000. Rabaul was practically destroyed by Allied bombing and was never actually re-captured from the Japanese, but fell into our hands when they surrendered.

RABAUL (BITA PAKA) WAR CEMETERY was established by the Army Graves Service in 1945 and was taken over by the Commission in October 1947. It contains the graves of those who lost their lives during the operations in New Britain and New Ireland, or who died in the area while prisoners of war, which were brought into the cemetery from isolated sites, from temporary military cemeteries and from camp burial grounds. It appears to have been the Japanese plan to remove Europeans taken prisoner on these islands to areas from which it would have been harder to escape and to replace them by labour forces of Indian and other Asiatic troops captured in Malaya and elsewhere. This explains the large number of Indian remains recovered by the Australians during the 1945 campaign in New Britain and New Ireland, and the preponderance of Indian Army casualties buried here.

The cemetery contains 1,120 Commonwealth burials of the Second World War, 500 of them unidentified.

This cemetery also contains First World War graves brought in from Rabaul Cemetery in 1950 and from Kokopo Old German Cemetery in 1961. Special memorials commemorate three casualties who were buried in Rabaul Old Civil Cemetery, but whose graves could not be traced following damage to the cemetery during the Japanese occupation. In all, 32 First World War servicemen are now buried or commemorated in the cemetery.

The RABAUL MEMORIAL, which stands within the cemetery, commemorates more than 1,200 members of the Royal Australian Army (including personnel of the New Guinea and Papuan local forces and constabulary) and Royal Australian Air Force who lost their lives in the area in January and February 1942 and from November 1944 to August 1945, and who have no known grave. 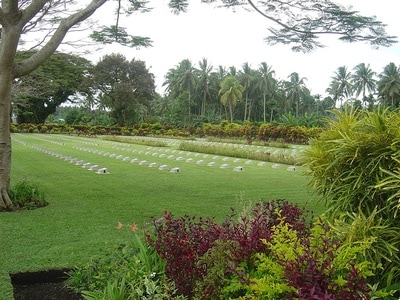 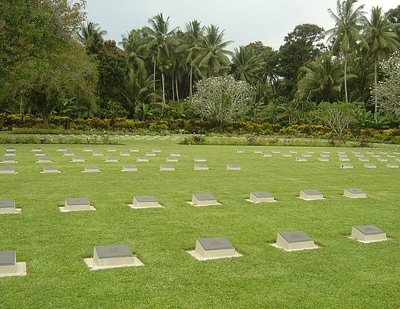 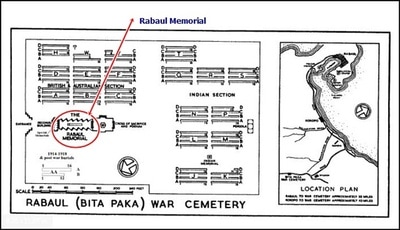 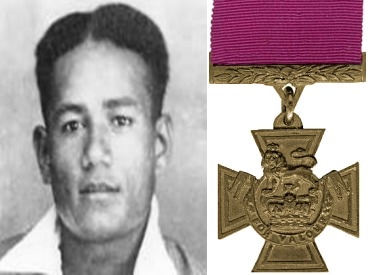 
Citation: The following details are given in the London Gazette of November, 2nd, 1944 : On June, 23rd, 1944 at Mawaraka, Bougainville, in the Solomon Islands, Cpl. Sefanaia Sukanaivalu crawled forward to rescue some men wounded when their platoon was ambushed. After recovering two men this N.C.O. volunteered to go alone through heavy fire to try and rescue another - but on the way back was seriously wounded and fell to the ground unable to move further. Several unsuccessful attempts were made to rescue him; and realising that his men would not withdraw while he was still alive Cpl. Sukanaivalu raised himself up in front of the Japanese machine gun and was riddled with bullets. This brave Fiji soldier, after rescuing two wounded men with the greatest heroism and being gravely wounded himself, deliberately sacrificed his own life knowing that in no other way could his men be induced to retire from a situation in which they must have been annihilated. 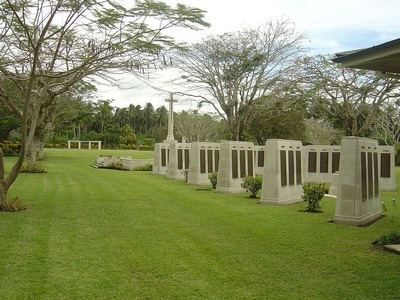 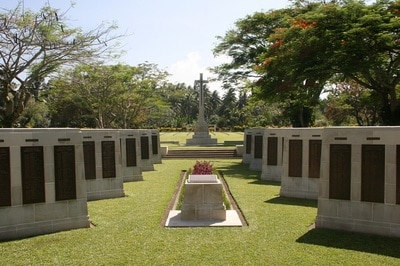