The town of Kvam is on the main E6 route from Oslo to Trondheim, approximately 75 kilometres north of Lillehammer. On entering the town the church can be seen on the right hand side. The Cross of Sacrifice is plainly visible in the churchyard. The Commonwealth War Graves Plot is located to the rear of the church. All the names are engraved upon a Screen Wall Memorial.

Kvam was the scene of bitter fighting by troops of the 15th Infantry Brigade during the withdrawal of Allied forces in central Norway in April 1940. The 1st Battalion, King's Own Yorkshire Light Infantry and the 1st Battalion, York and Lancaster Regiment held positions in this area from 24-28 April against fierce enemy land and air attacks and those who were killed in action during the last week of April are buried in a collective grave in Kvam Churchyard. Kvam Churchyard contains 54 Commonwealth burials. An investigation undertaken by Commission staff in 1999 resulted in the identification of the 15 servicemen originally buried here as unidentified. 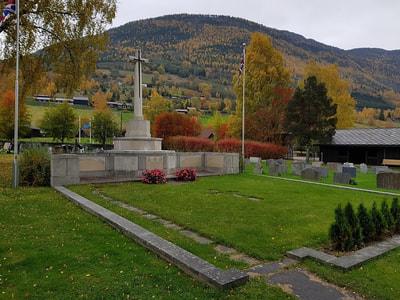