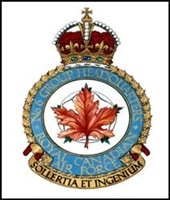 Situated on the east side of the A1 road near the A59 junction, the rambling old 75-room Victorian castle at Allerton Park was requisitioned from Lord Mowbray by the Air Ministry and transformed into offices for administration and operation for the Canadian bomber group. Their new permanent quarters became known as 'Castle Dismal'.
On 6 December 1942, the headquarters unit moved here from its temporary home at Linton-on-Ouse and No. 6 (RCAF) Group officially assumed operational status on 1 January 1943.

From then on the Canadian squadrons ceased to take orders from 4 Group HQ and were transferred to 6 Group HQ which reported directly to Bomber Command headquarters at High Wycombe. What should be made clear is that the full financial responsibility for the maintenance and administration of 6 Group, with the single exception of the pay and allowances of attached RAF and other non-RCAF personnel, was voluntarily assumed by Canada and defrayed from Canadian taxes and domestic loans. In No. 6 Group, which was theoretically entirely Canadian, there was actually a small percentage non-Canadian. These were aircrew who were caught up during crewing difficulties and flight engineers who were always RAF, for the RCAF did not train any Canadians in this trade. By the time it assumed operational status, No. 6 Group consisted of six Canadian bomber squadrons located at four stations:


Leeming with 408 joined the Group on 2 January, and Topcliffe with 424 on the 3rd. Skipton-on-Swale was under construction as the Group's 7th station. At the war's end the RCAF had eleven bomber airfields in England, of which seven were operational bases controlled by No. 6 Group and four were training units.They were sited in – or just beyond – the Vale of York. Being the most northerly Group in Bomber Command, the Canadians always had that little bit further to fly, with the exception of sorties to Norway and, when coming home on a cupful of petrol, those few extra miles were the most gruelling. Moreover, the topographical features of the Vale of York meant the airfields had to be built close to each other and this caused serious circuit overlap. Added to this problem was the prevailing mists and smog from the industrial areas, which increased the hazards of take-off and landing.

The Group HQ was responsible for ensuring that its squadrons complied with Bomber Command's instructions as to the number of aircraft to be despatched, their bomb loads, departure times, route, bombing height, etc. The stations provided the squadrons with housing and messing facilities and aerodrome security. The squadrons themselves were independent units and were responsible for their own admin and aircraft maintenance.

On 25 March 1943, the Group began to reorganize under Bomber Command's newly-deised Base system. This consisted of a parent station (all of which were 'permanent' stations built for the RAF during the Expansion Period) and either one or two sub-stations, which were all of wartime construction.

On 16 September 1943 Bomber Command issued a directive stationg that bases were to be known by number and not the geographical name. The number was to be a two-figure combination, the first figure identifying the parent Group and the second, the base itself. The training (or conversion) base was to be number one in each Group. Thus, Topcliffe Training Base became No. 61 (Training) Base and Linton-on-Ouse Operational Base became No. 62 (Operational) Base. On 1 May 1944 the Canadian Group had added enough new stations and squadrons to complete its full complement for wartime organisation and Nos. 63 and 64 (Operational).

In the centre o the region was No. 63 Base with HQ at Leeming, home of Nos. 427 (Lion, ZL)) and 429 (Bison, code AL) Squadrons. The sub-station was Skipton-on-Swale, from where Nos. 424 (Tiger, code QB) and 433 (Porcupine, code BM) Squadron operated.
L-R Skipton-on-Swale and Leeming
​
The most northerly airfields were 64 Base with HQ at Middleton St. George, home of Nos. 419 (Moose, VR) and 428 (Ghost, NA) Squadrons, and its sub-station, Croft, which housed Nos. 431 (Iroquois, SE) and 434 (Bluenose, WL) Squadrons.
Until the autumn of 1944 No. 6 Group remained in control of No. 61 (Training) Base, comprising Topcliffe (HQ) with sub-stations at Dalton, Dishforth and Wombleton. The latter was situated in the North Riding of Yorkshire and was the most isolated of the Canadian bomber stations. For administrative reasons these were transferred to No. 7 (Training) Group and re-numbered N. 76 (RCAF) Training Base on 9 November 1944. It retained its Canadian personnel and close association with No. 6 (RCAF) Group to the end of the war. The Group's heaviest attack of the whole war was against Dortmund on the night of 6-7 October 1944 when 293 Lancasters and Halifaxes were despatched, 273 bombed the primary target, three bombed the alternative, two failed to return and fifteen dropped no bombs for various reasons. Life was very hectic and, as the squadrons converted from Wellingtons through Halifax IIs and Vs, and Lancaster IIs to Halifax IIIs and VIIs and Lancaster Is, IIIs and Xs, many transfers occurred from station to station. Only one squadron, No. 419, remained a the one station, Middleton St. George, from the formation of the Group until the cessation of hostilities. It was this unit which received the first Canadian-built Lancaster X, KB700, the famous Ruhr Express. It was probably the most photographed aircraft ever flown by the Canucks and, after three operational sorties with 405 Squadron in No. 8 (PFF) Group as LQ-Q, it flew with No. 419 for a further 46 raids before being destroyed in a crash at Middleton St. George on returning from its 49th op on the night of 2-3 January 1945.

The Group's last mission of the war was on 25 April 1945, when 102 Lancs and 92 Hallies, plus 160 aircraft from 4 Group, bombed gun positions on the Island of Wangerooge, one Lancaster and two Halifaxes failing to return.

After VE-Day, 6 Group took part in ferrying ex-PoWs back to Britain – in all, 4,329 men were transported over a period of three days.

At the end of August 1945, No. 6 Group's existence came to a close; No. 6 Group Rear HQ disbanded on 1 September 1945 and the RCAF moved out of Castle Dismal for the last time.


The price paid by 6 Group crews was staggering: 814 aircraft were lost with approximately 3,500 men killed or presumed dead.