Méharicourt is a village and commune 32 kilometres east-south-east of Amiens and some 7 kilometres south of the road from that town to St. Quentin. The Communal Cemetery is on the north-western side of the village on the road to Rosieres.

The cemetery is at all times open to the public 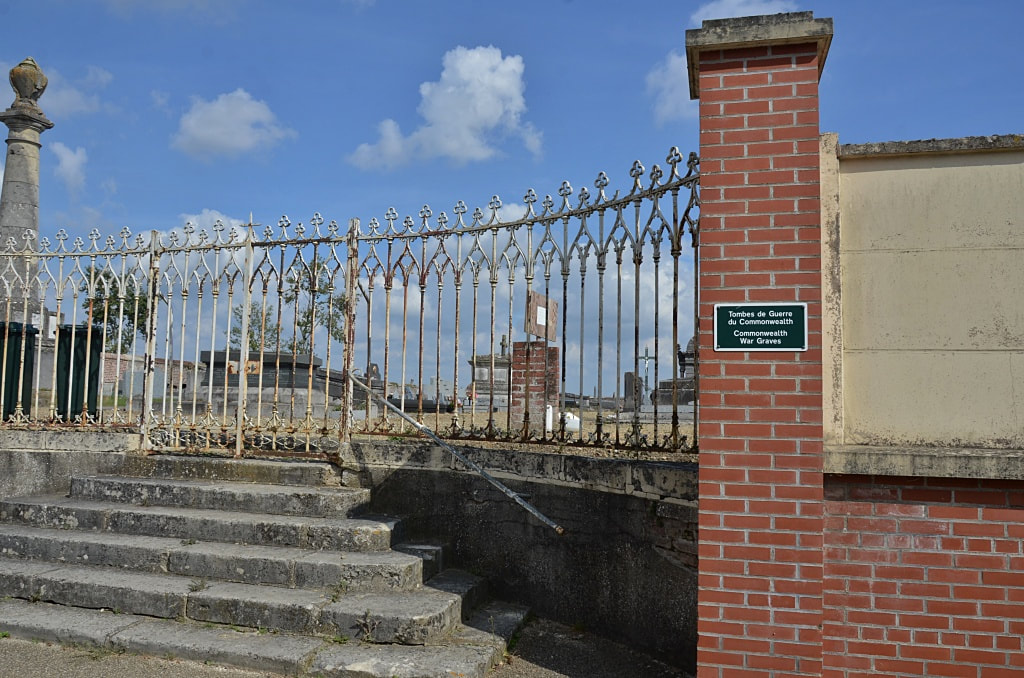 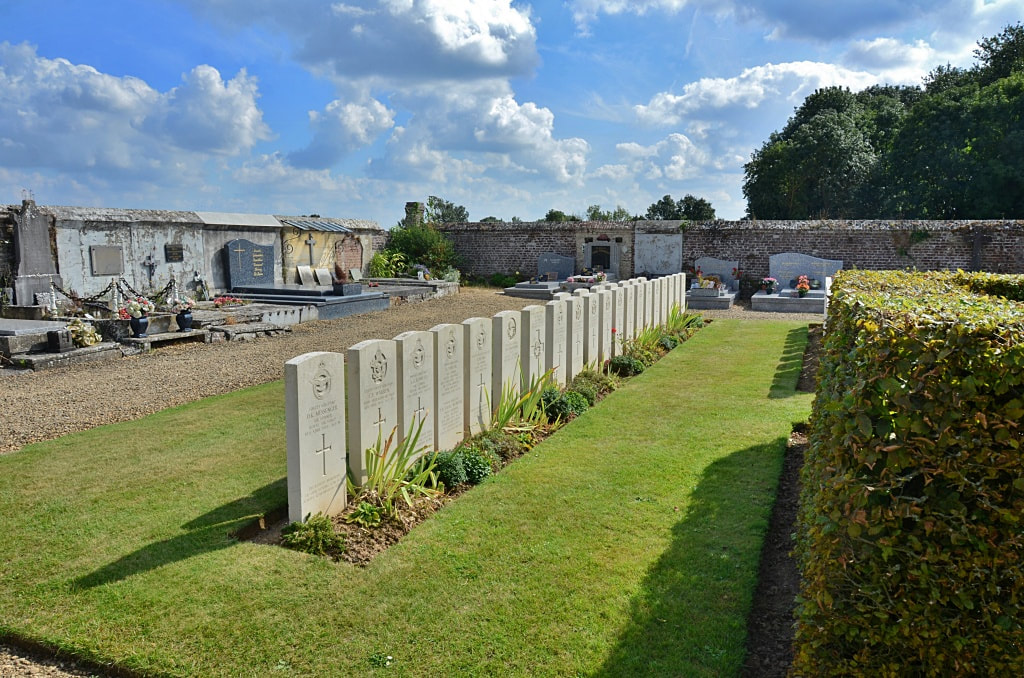 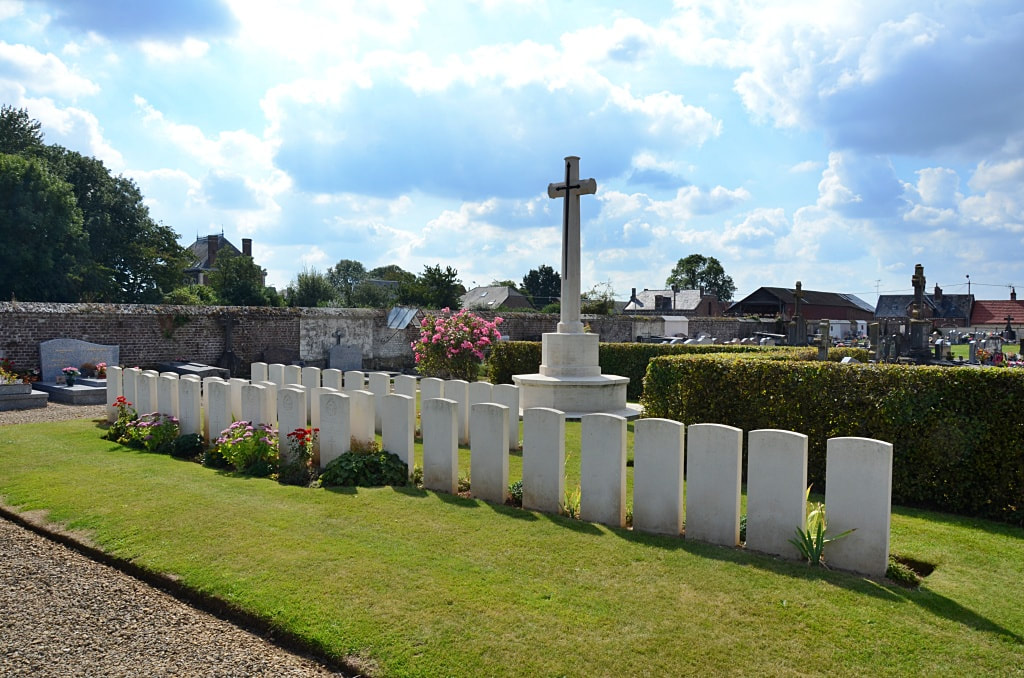 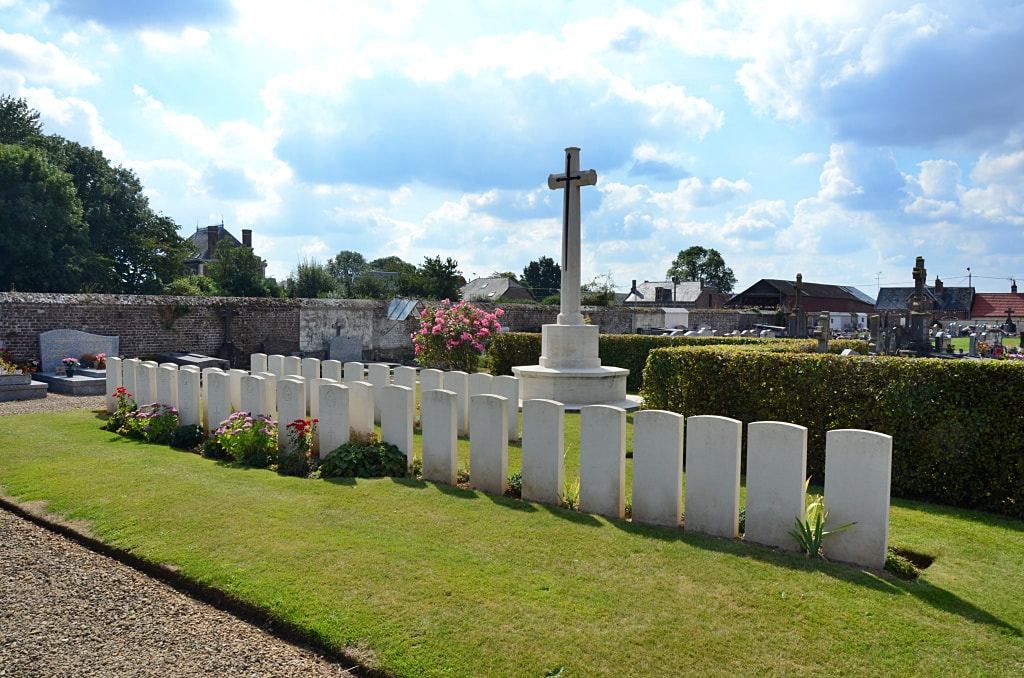 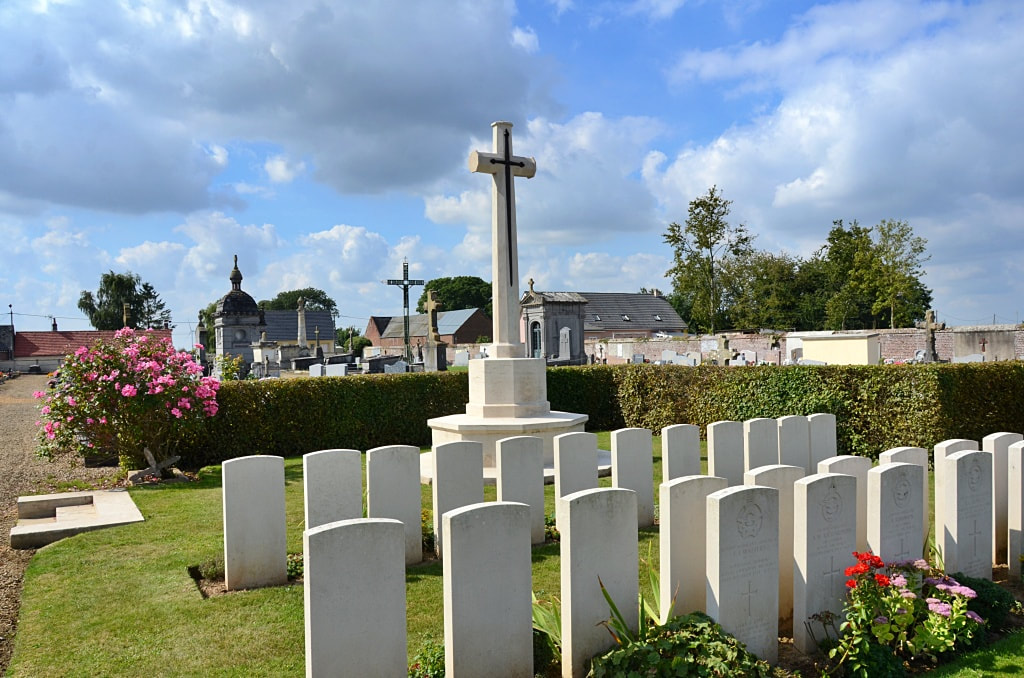 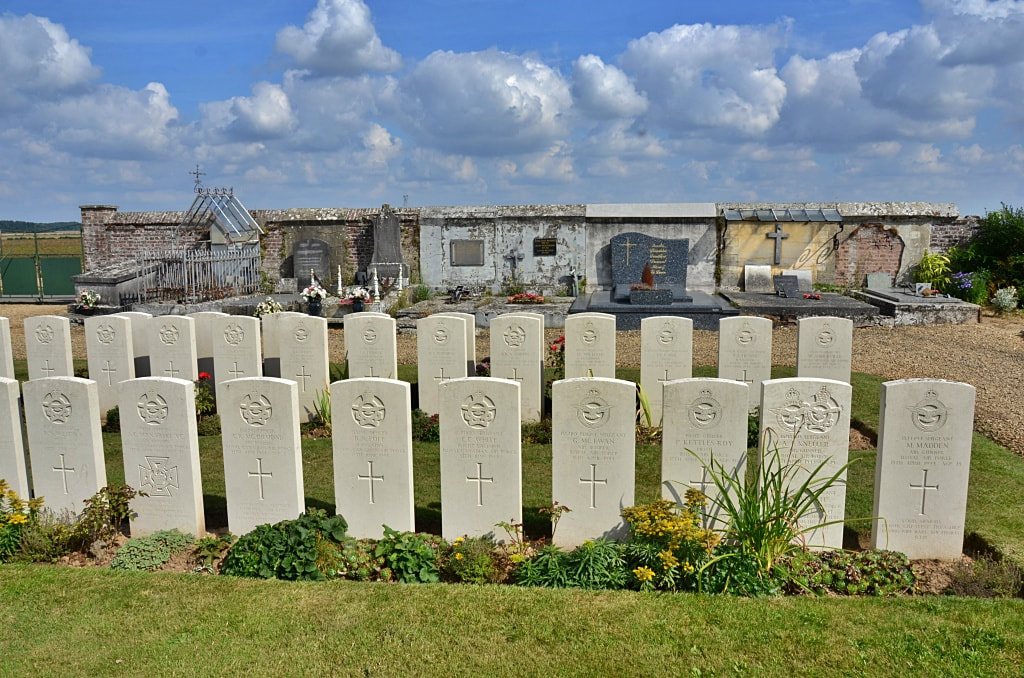 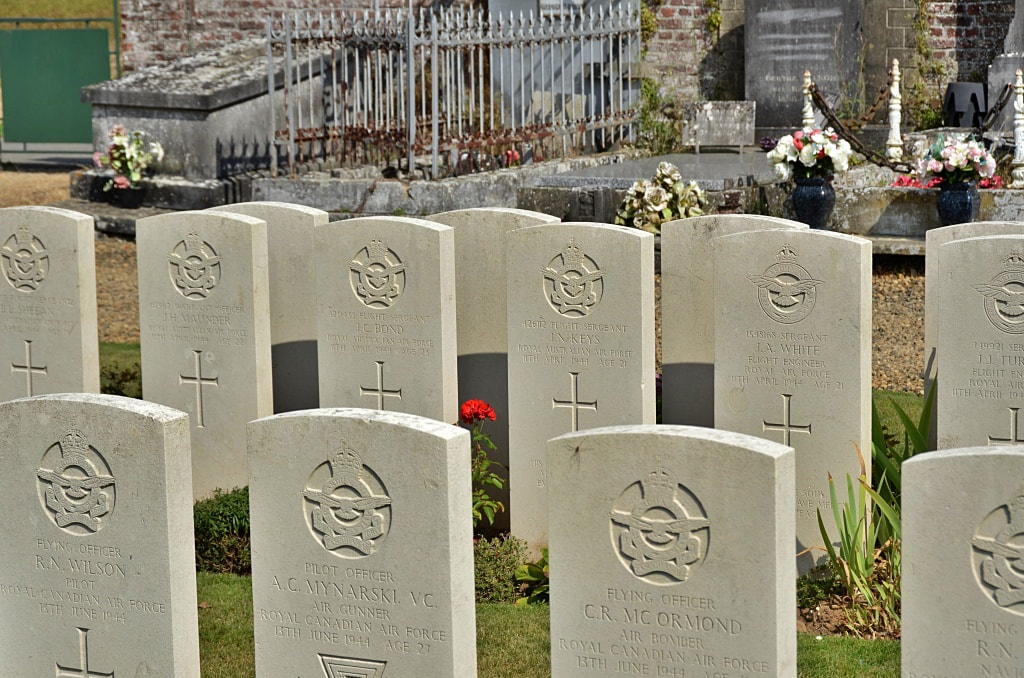 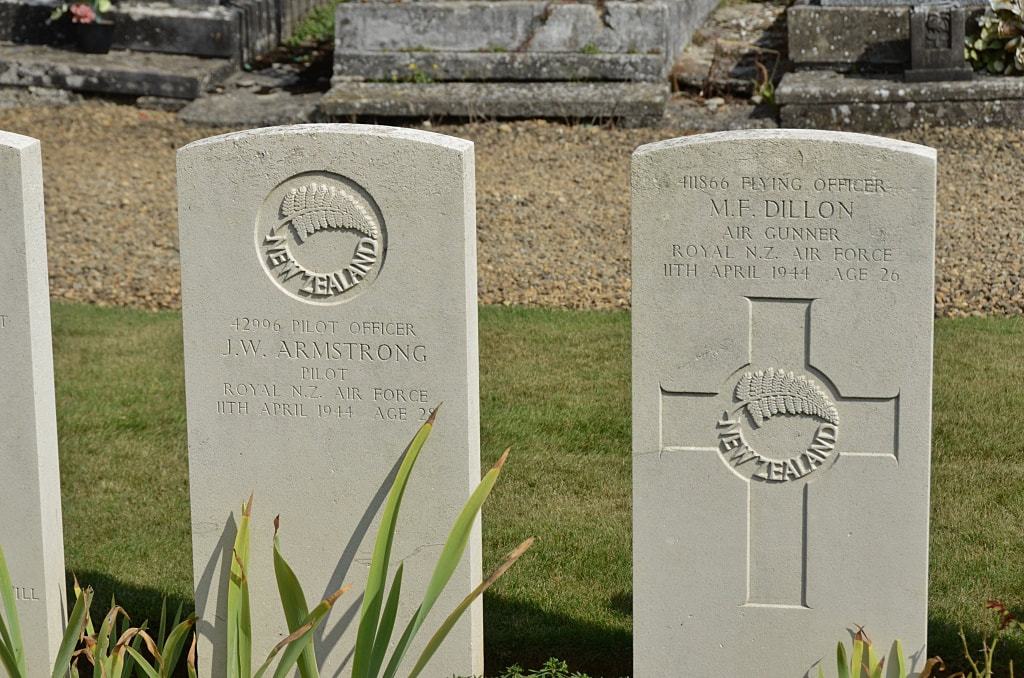 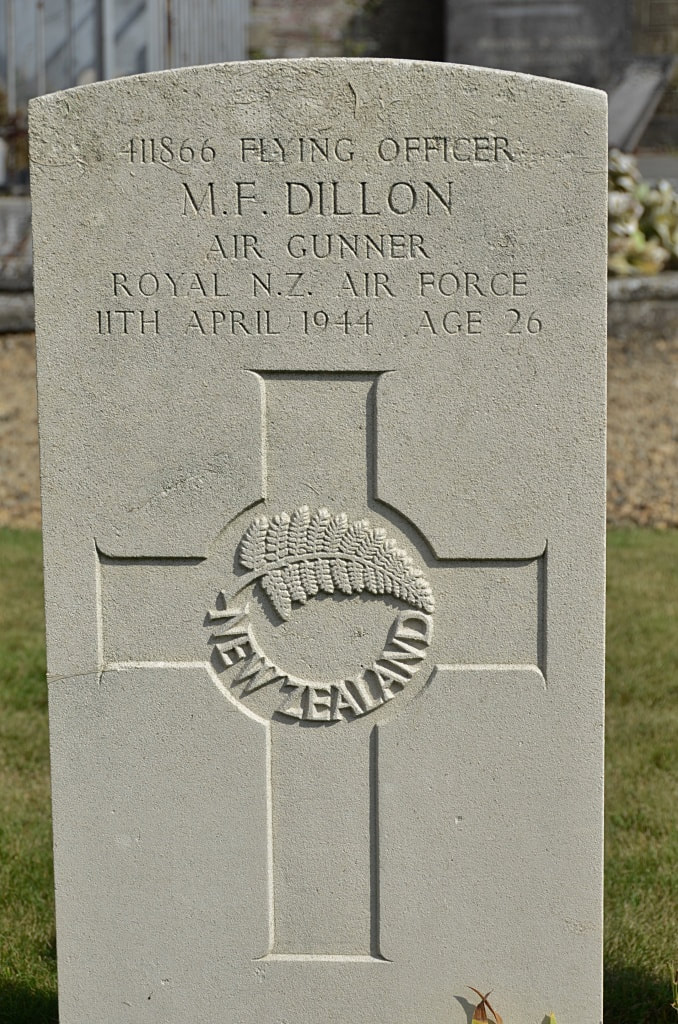 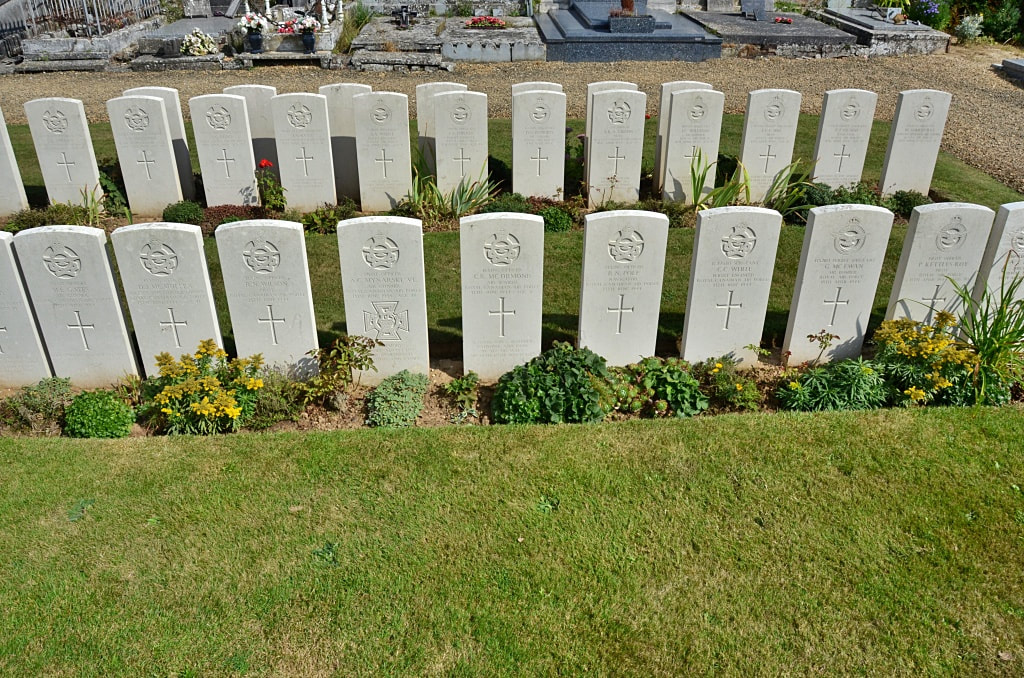 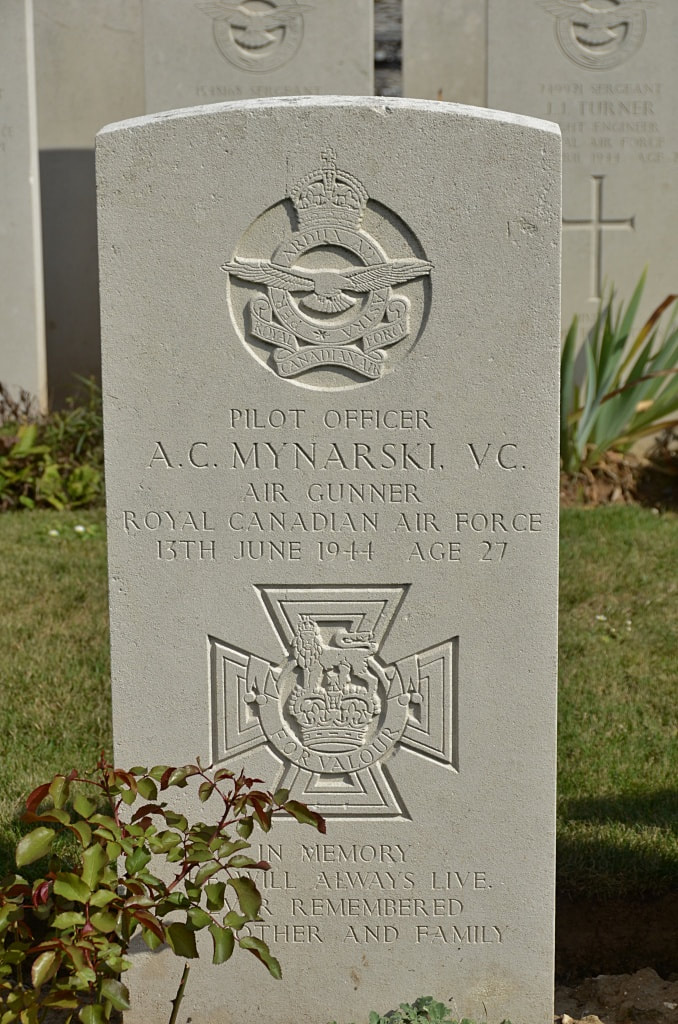 He was the son of Polish immigrants. He was educated at King Edward and Isaac Newton Elementary Schools and at St. John's Technical School. To help support his family after his father's death, he worked for four years as a leather worker in Winnipeg, Manitoba.

Andrew Charles Mynarski was a quiet man with a good sense of humour. He enjoyed woodworking and loved to design and build furniture. He joined the Royal Canadian Air Force just before his 25th birthday. He trained as an Air Gunner and was posted to Number 9 Squadron in October, 1943. In March, 1944, after training with No 1664 HCU he was posted to 419 (Moose) Squadron to fly Lancasters from RAF Middleton St George.

The crew took off for their 13th mission together on the night of June 12, their target, the rail marshalling yards at Cambrai, France. It would be the crew's 13th sortie. While waiting to go, the crew couldn't help but think of these omens. Andrew found a four leaf clover in the grass by the planes. He insisted that his closest buddy in the crew, tail gunner Pat Brophy, should take it.

After their plane was hit, and the crew bailed out, Andrew noted that his buddy, Pat Brophy was caught in the rear turret. He attempted to rescue him, now knowing that his parachute and clothing had caught fire. Realizing that he could not save his friend, he stood at attention and saluted Brophy and jumped. Brophy was blown safely away from the plane when some of the explosives on board blew on hitting the ground, Mynarski regretfully, hit the ground, but was burned so badly, died within hours.

Pilot Officer Mynarski was the first member of the R.C.A.F. to be decorated with the Victoria Cross in the Second World War. His Victoria Cross is on display at the Air Command Headquarters in Winnipeg.
​
Pilot Officer Mynarski was honoured with the erection of a 10 foot bronze statue of his likeness at Middleton St. George, England; home to the 419 Squadron's 6th Bomber Group. On the 4th of June 2005 at a ceremony attended by the families of Mynarski's crew, the statue was unveiled. The Winnipeg Statue Project is gaining ground with donations,to erect a twin statue which will find its home in the North end corner of Winnipeg. The students and staff at Andrew Mynarski School,also raised funds to purchase a plaque to commemorate Pilot Officer Mynarski at their school.

The following details are given in the London Gazette of October 11th, 1946:- P/O Mynarski was the mid-upper gunner of the crew of a Lancaster attacking Cambrai, France on June 12th, 1944. The aircraft was hit by an enemy fighter; both port engines failed, extensive fire broke out, and the captain ordered the crew to abandon the plane. As P/O Mynarski moved towards the escape hatch he saw that the rear gunner could not leave his turret, which was rendered immovable when the hydraulic gear was put out of action by the failure of the port engine. The Pilot Officer unhesitatingly moved back through the flames and tried to release the gunner, although his own clothing and parachute were on fire. All his efforts to move the turret and free his comrade were in vain, and eventually the gunner told him to try to save his own life. Reluctantly P/O Mynarski moved to the escape hatch and there, as a last gesture, turned towards the trapped gunner, stood to attention in his flaming clothing, and saluted before jumping. French people watched his descent and he was eventually found, but was so badly burned that he died. The rear gunner escaped miraculously when the plane crashed and testified that, but for his gallant rescue attempt, P/O Mynarski could have left the aircraft in safety and would doubtless have escaped death. Although he must have been aware that he faced almost certain death, P/O Mynarski courageously and willingly accepted the danger. He lost his life by a most conspicuous act of heroism which called for valour of the highest order. 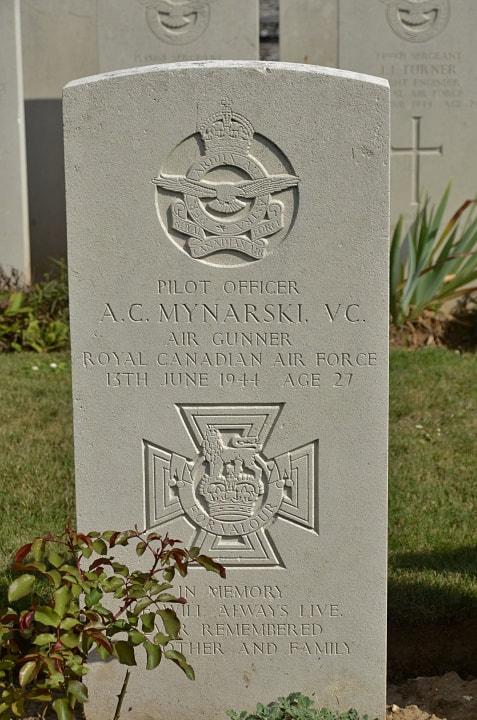 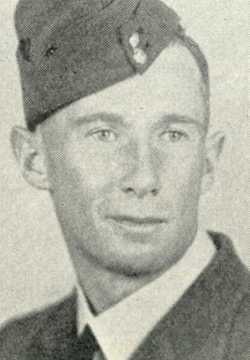 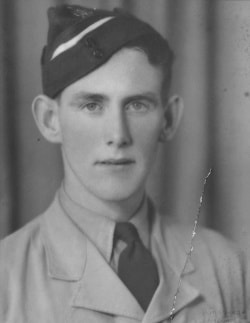 Studio portrait of 420433 Flight Sergeant (Flt Sgt) John Cecil Bond, 466 Squadron RAAF, of Newtown, NSW. Flt Sgt Bond was lost on operations aged 22 on 11 April 1944 when the Halifax LV875 he was piloting was shot down by a German night fighter and crashed near Rosieres-en-Santerre, west of Amiens. The five Australians in the crew were buried in the communal cemetery in the village of Méharicourt. 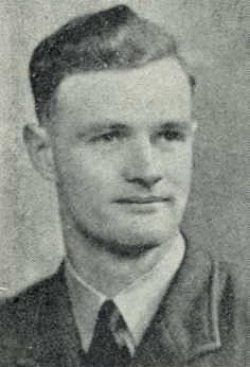 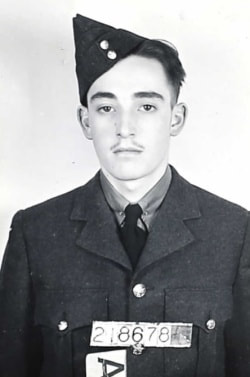 His headstone bears the inscription "In Loving Memory Of Our Son And Brother Who Died For Peace. God's Will Be Done" 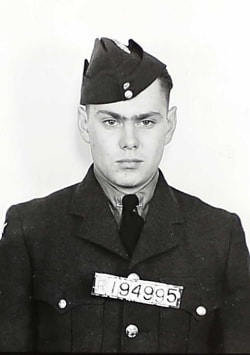 His headstone bears the inscription "Greater Love Hath No Man" 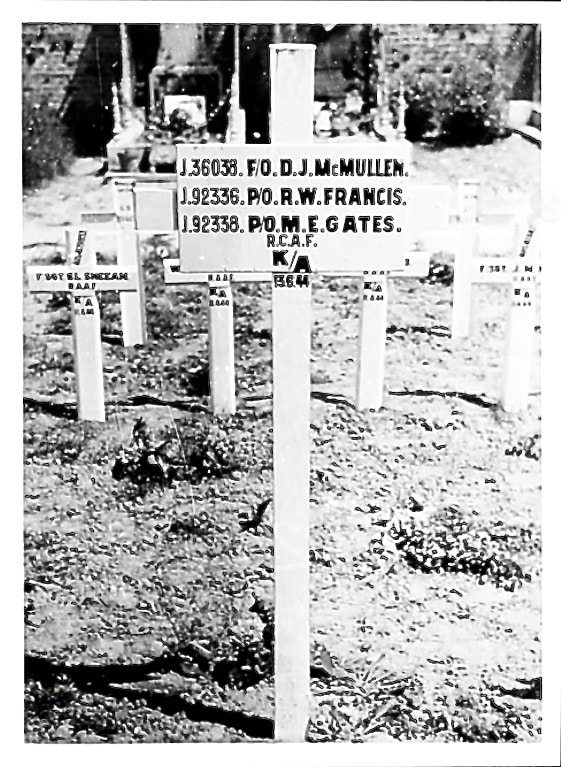 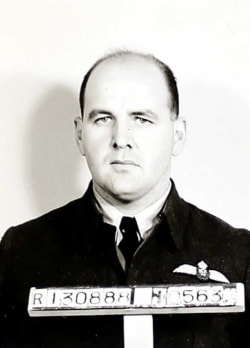 ​Son of J. I. and Agnes M. Gibson, of Alliance, Alberta, Canada. 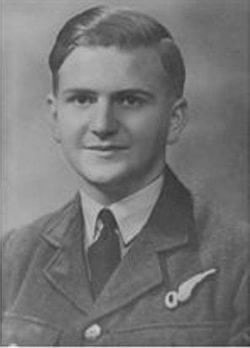 His headstone bears the inscription "A Rover Scout, Dutiful To His God, Country And Parents" 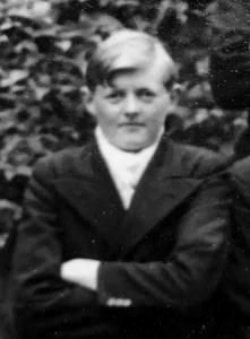 His headstone bears the inscription "One Of Kenya's Brave Sons" 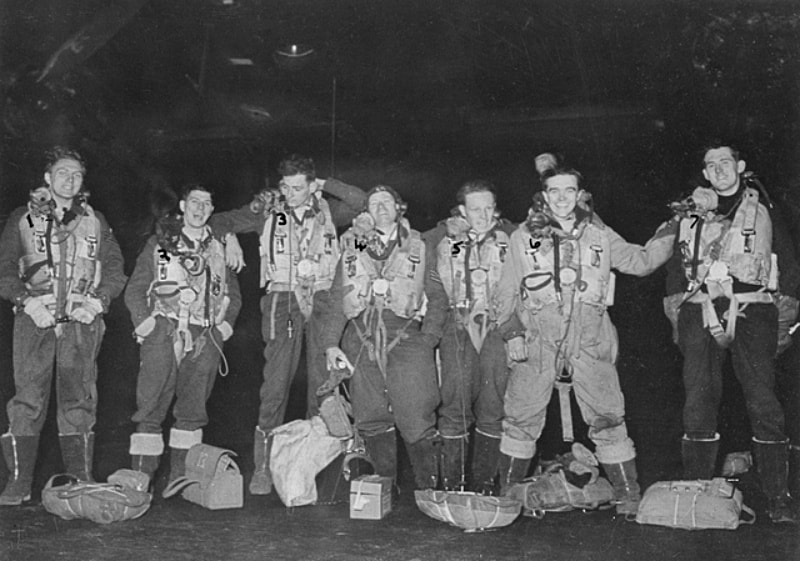 Leconfield, England. 20th January 1944. Halifax crew of No. 466 Squadron, R. A. A. F. on their return from a sortie over Berlin,
Identified 5th from the left and buried in this cemetery is 412562 Warrant Officer John Henry Maunder, Royal Australian Air Force who was lost on operations over France on 11th April 1944. He was 22 years old. British Plot. Grave 25. Son of Mr. and Mrs. Cecil George Maunder, of Guildford, New South Wales, Australia; husband of Beryl Mary Maunder, of Christchurch, Hampshire, England. 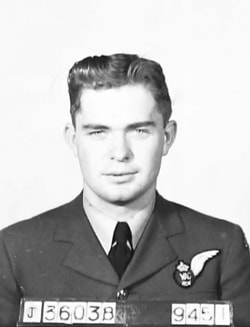 Son of James and Laura McMullen, of Campbellford, Ontario, Canada. 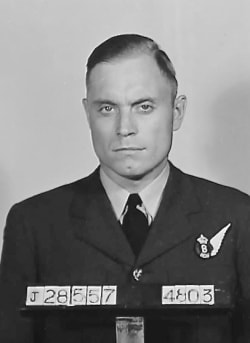 Son of John Thomas McOrmond and Florence May McOrmond, of Winnipeg, Manitoba, Canada.

His headstone bears the inscription A Good Son & Brother; Faithful And Kind In All His Ways "He Shall Enter Into Peace" 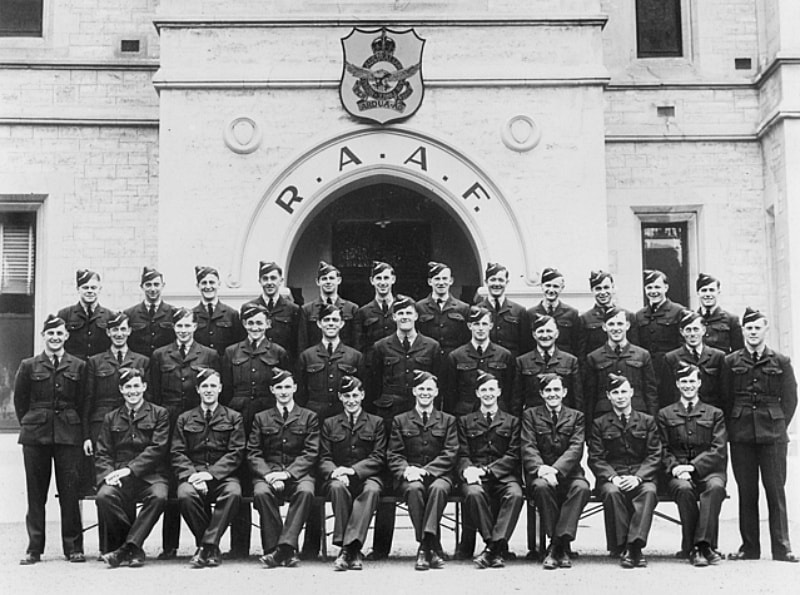 Group portrait of No. 4 Initial Training School, RAAF, Course No. 21, "C" Squadron, Flight 13.
Identified in the middle row, 9th from the left and buried in this cemetery is 409855 Flight Sergeant Brian Leo Sheean, 466 Squadron, Royal Australian Air Force who died on flying operation over France on 11th April 1944. He was 19 years old. British Plot. Grave 26. Son of Edward John and Eileen Mary Sheean, of Cobden, Victoria, Australia. His headstone bears the inscription "We Have You In Our Memory, God Has You In His Care" 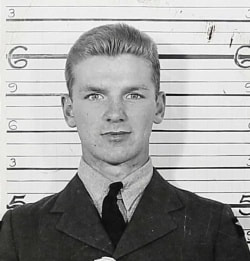 ​Son of Claude and Retha Weaver, of Tulsa, Oklahoma, U.S.A.

His brother Corporal David Overton Weaver was also a casualty of WWII. He was serving with the U. S. Marine Corps Reserve and was killed in action March 5,1945 on Iwo Jima, Volcano Islands, Western Pacific. 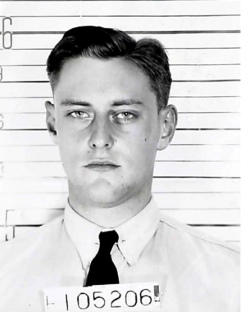 Son of Herbert T. Weeden and Ida B. Weeden, of Paisley, Ontario, Canada.

His headstone bears the inscription "... That Whosoever Believeth In Him Should Not Perish, But Have Everlasting Life" 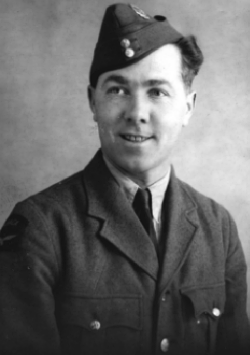 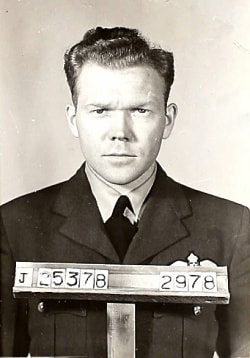