The Malta Memorial is situated in the area of Floriana and is easily identified by the Golden Eagle which surmounts the column. It stands just outside the main entrance to Valletta.

The Malta Memorial commemorates almost 2,300 airmen who lost their lives during the Second World War whilst serving with the Commonwealth Air Forces flying from bases in Austria, Italy, Sicily, islands of the Adriatic and Mediterranean, Malta, Tunisia, Algeria, Morocco, West Africa, Yugoslavia and Gibraltar, and who have no known grave. The Memorial was unveiled by The Queen on 3 May 1954.

The memorial was designed by Sir Hubert Worthington, R.A., while the eagle which surmounts the column is the work of the sculptor Charles Wheeler, R.A. 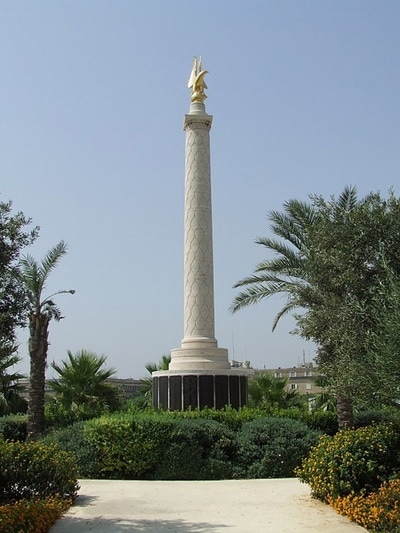 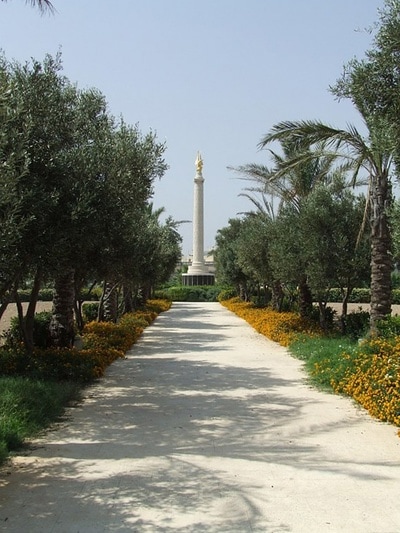 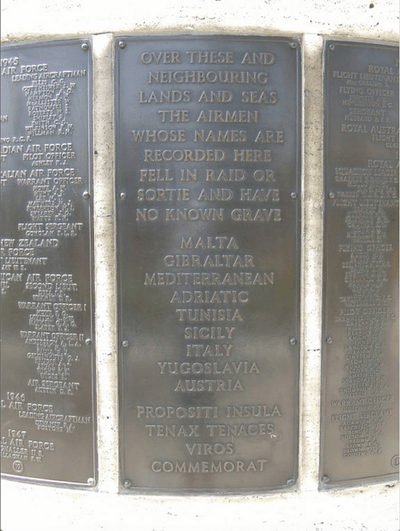 
Citation: The London Gazette of 29th October, 1943, gives the following particulars; Flying Officer Trigg had rendered outstanding service on convoy escort and anti-submarine duties. He had completed his operational sorties and had invariably displayed skill and courage of a very high order. One day in August, 1943, he undertook, as captain and pilot, a patrol in a Liberator although he had not previously made any operational sorties in that type of aircraft. After a search of eight hours' duration, a surfaced U-boat was sighted. Flying Officer Trigg immediately prepared to attack. During the approach the aircraft received many hits from the submarine's anti-aircraft guns and burst into flames. Flying Officer Trigg could have broken off the engagement and made a forced landing in the sea but if he continued the attack every second spent in the air would diminish his chances of survival. There could have been no hesitation or doubt in his mind. In spite of the precarious condition of his aircraft, he maintained his course and executed a masterly and devastating attack. A short distance further on the Liberator dived into the sea with the gallant captain and crew. The U-boat sank within 20 minutes and some of her crew were picked up later in a rubber dinghy that had broken loose from the Liberator.