Labuan (part of Sabah, Malaysia) is a small island in Brunei Bay, off the coast of north-west Borneo.

The island is best reached by air from Kuala Lumpur, the Malaysian capital, from where there are daily flights. There are also flights from Singapore and Manila.

Should you have any local queries, the Manager, Mr Gobhu Gopal (gobhu.gopal@cwgc.org),or Head Gardener, Mr Esau Kak (esau.kak@cwgc.org) may be contacted by e-mail.

Wheelchair access is possible through either the side or main entrance gates.

From 1880 until over-run by the Japanese in 1942, the State of North Borneo was governed by the British North Borneo Chartered Company, the last chartered company to administer any part of the British Empire. It did not become a British Crown Colony until 26th June 1946, when the Chartered company transferred the sovereign rights and assets to the Crown. In July 1946, Sarawak was ceded to Britain, and thus was formed the new Crown Colony of Sarawak. Brunei was, until 1984, a British Protected State (it is now an independent Sultanate).

Strategically important after Singapore as the key to the area between Malaya and Australia, and a springboard for any large scale operations on Malaya and Java, Borneo came within the Malaya command, and North Borneo was the first of the British possessions in the Pacific to fall to the Japanese. Through lack of resources only token forces could be stationed there, and they could be expected to do little more than gain sufficient time for the demolition of the oilfield installations. In December 1941 the Garrison consisted of the 2/15th Punjab Regiment; they were stationed at Kuching in Sarawak, where there was an airfield, and at Miri, some 400 miles as the crow flies to the north-east. At Miri and at Seria, in near by Brunei, were the oilfields; and on the 8th December 1941 orders were given for their demolition. This the local garrison carried out successfully, the troops, oil company officials and a detachment of Straits Settlements Police were evacuated by sea on the 13th. On the 16th, Japanese troops landed at Seria.

On December 23rd orders were received for the demolition of the landing ground at Kuching which, as well as the town, had suffered several air attacks during the few days before that date. On December 24th Japanese landing-craft made their way up the waterways between the sea and Kuching, and by the afternoon of that day the Japanese flag was flying over the residence of the Rajah of Sarawak. The following morning the British Commander, Lt. Col. Lane, decided to withdraw westwards into Dutch West Borneo, and then south. On reaching Sanggau on December 29th the battalion came under the orders of the local Dutch commander. There it fought alongside the Dutch to prevent the Japanese from taking the airfield at Sanggau, the principal Anglo-Dutch base in West Borneo. In Dutch Borneo, Tarakan, an important oil centre in the north-east, was taken on the 10th January 1942; and Balikpapan, farther south, with its huge modern refineries and groups of oil tanks was lost at the end of the month.

Finally, through February and March, after fighting a rearguard action, the Punjabis made their way through wild and difficult country to the south coast of Borneo. This they reached, exhausted, towards the end of March, having covered a total distance of some 800 miles since leaving Kuching. The Dutch, by then, had been forced to surrender, and on the 3rd April the 2/15th Punjab Regiment became Prisoners of War.

In 1945 Borneo was freed from the Japanese by Australian forces. The Commander of the 9th Division, Australian Imperial Force, received the unconditional surrender of the 32nd Japanese Southern Army in North Borneo and Sarawak on a spot in the north of Labuan island, which is now marked by a plaque recording the fact. The recovery of Borneo virtually completed the tactical control of the South pacific.

After the fall of Singapore several thousand British and Australian Prisoners of War were sent to camps in Borneo, mainly in the Sandakan area on the eastern coast of North Borneo, where they were employed on aerodrome construction. The Australians belonged to the 8th Australian Division (“B” force numbering 1,494 and “E” force 500). In October 1943 most of the officers were separated from their men and sent to Kuching. Thereafter conditions at Sandakan greatly worsened; the men were starved, beaten and overworked by their captors. In February 1945 the Japanese, anticipating Allied landings in North Borneo, decided to move the Prisoners of War westwards to Ranau, more than 160 miles inland from Sandakan. Although many had already been transferred to other centres, more than 1,900 British and Australian servicemen remained to take part in the “Death march to Ranau”. Those who fell, sick or exhausted, on the journey were killed; the survivors who reached Ranau were made to perform superhuman work on starvation rations. Out of the 2,000 men who left Sandakan only 260 arrived at Ranau, and most of these succumbed later. Only six survived the end of the war. These six escaped from Ranau and were living with the natives when rescued.

When the Australian Army Graves Service entered Borneo they followed the route from Sandakan to Ranau, and found many unidentifiable victims of this infamous march. These and other casualties from Battlefield Burial Grounds and from scattered graves throughout Borneo were taken in the first instance to Sandakan, where a large number of prisoners of war were already buried. This flat coastal area, however, was subject to severe flooding and it proved impracticable to construct and maintain a permanent cemetery. The Sandakan graves, numbering 2,700 of which more than half were unnamed, were therefore transferred to Labuan War Cemetery, specially constructed to receive graves from all over Borneo.

As well as the graves from Sandakan, about 500 are from Kuching where there was another large prisoner-of-war camp. The total number of burials is 3,922. The preponderance of unidentified graves is due to the destruction of all the records of the camps by Lieutenant-Colonel Suga, the Japanese commandant, before the Australians reached Kuching, his headquarters. When apprehended, this man committed suicide rather than face questioning on his conduct of the Borneo Camps. 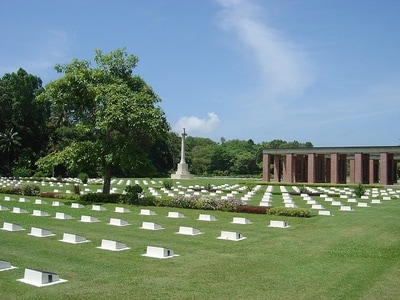 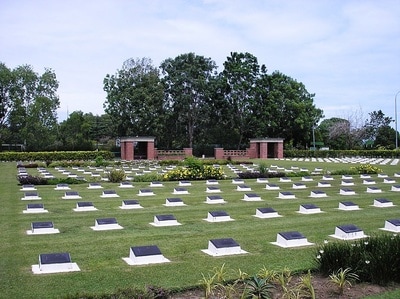 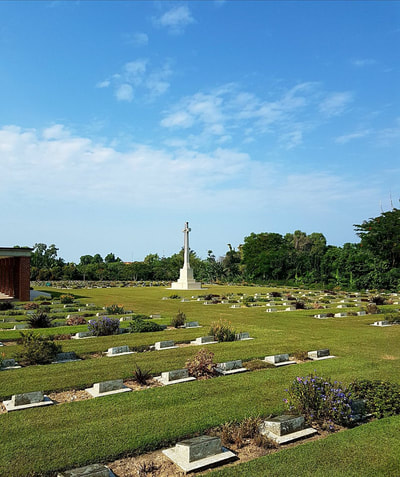 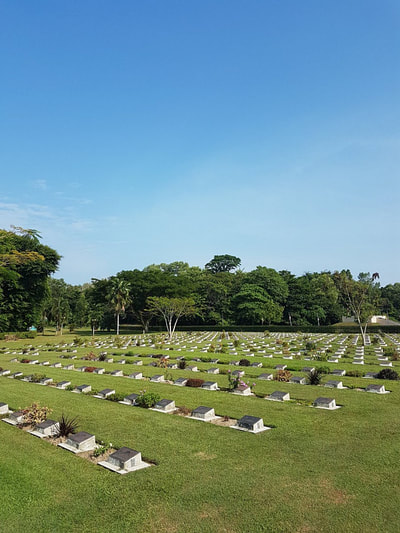 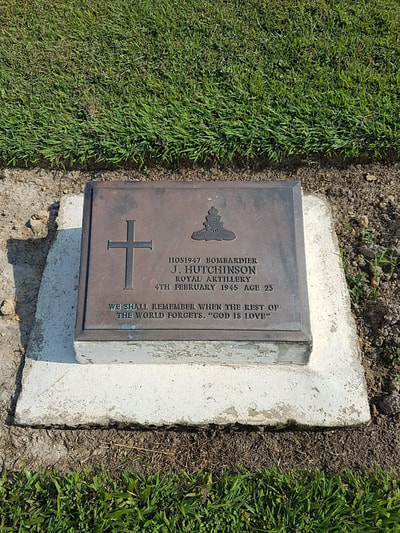 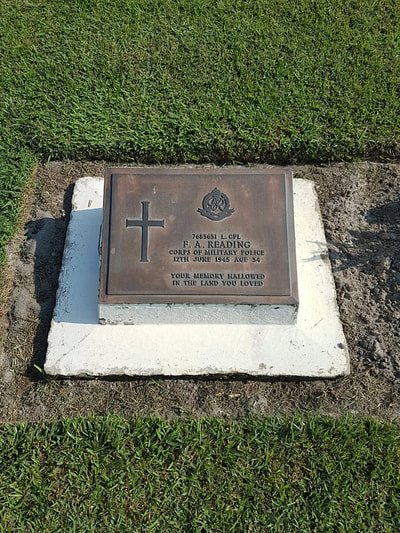 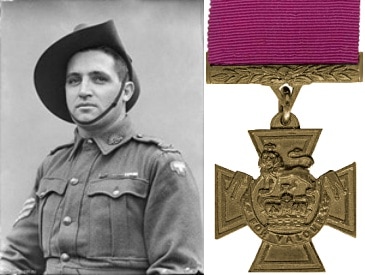 
Citation: The following details are given in the London Gazette of 24th April, 1945:-On 24th November, 1943, Sergeant Thomas Currie Derrick, D.C.M., was in command of a platoon of a Company of Australian Infantry ordered to attack a feature from the township of Sattelburg. For over two hours many unsuccessful attempts were made, under heavy fire from enemy strong points at the top of a precipitous cliff which the Company had to scale to reach the objective. The task appeared impossible, and shortly before last light the Company was ordered to retire. Sergeant Derrick requested, and was granted, permission to make one last attempt. Moving ahead of his forward section he personally destroyed with hand grenades an enemy post which had been holding up this section. His second section were heavily attacked by machine guns and grenades from six enemy posts. Without regard for his personal safety he went ahead of the leading men and with grenades so completely demoralised the enemy that they fled leaving weapons and grenades. The Company was thus enabled to gain its first foothold on the precipitous ground. Then on four separate occasions Sergeant Derrick dashed forward and threw grenades at a range of 5 to 7 metres until the remaining three posts were silenced. In all he reduced ten enemy posts, and from the vital ground he captured the Battalion moved on and took Sattelburg. Undoubtedly the capture of Sattelburg was due to Sergeant Derrick's fine leadership and refusal to admit defeat in a seemingly impossible situation. His outstanding gallantry, thoroughness and devotion to duty were an inspiration not only to his platoon and company, but to the whole battalion. 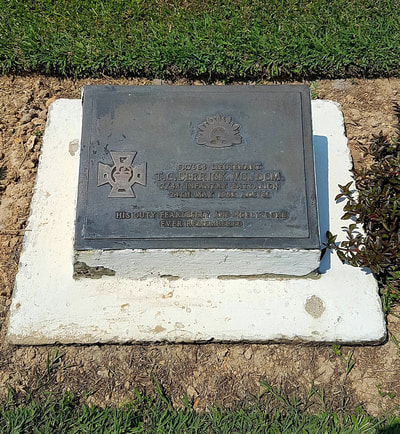 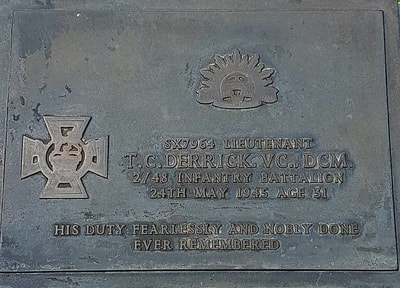 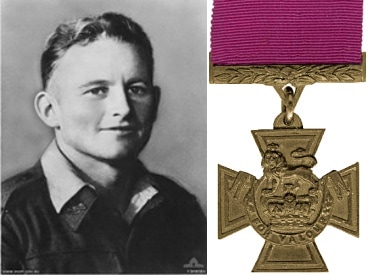 
Citation: The following details are given in the London Gazette of 10th November, 1945 - In an attack at Tarakan, Borneo, on 12th May, 1945 Corporal Mackey was in charge of a section of the 2nd/3rd Australian Pioneer Battalion. The section came under fire from three well sited enemy positions. Corporal Mackey charged the first of three machine gun positions that were holding up his platoon's advance and bayonetted one gunner and then killed the crew of a second gun with grenades. Changing his rifle for a sub-machine-gun he attacked the second machine-gun position. He was killed but not before he had killed two more of the enemy. By his exceptional bravery and complete disregard for his own life Corporal Mackey was largely responsible for the killing of seven Japanese and the elimination of two machine-gun posts, which enabled his platoon to gain its objective, from which the company continued to engage the enemy. His fearless action and outstanding courage were an inspiration to the whole battalion. 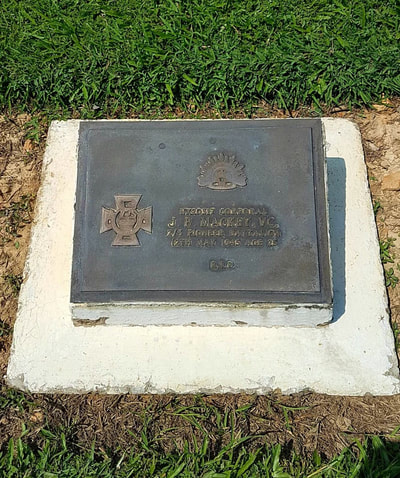 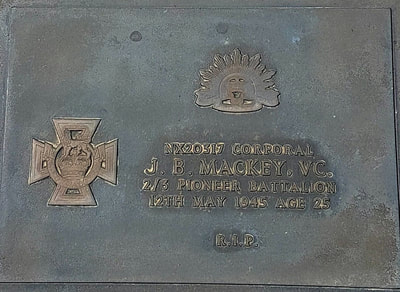 The Labuan Memorial was primarily intended to commemorate the officers and men of the Australian Army and Air Force who died while prisoners of war in Borneo and the Philippines from 1942 to 1945 and during the 1945 operations for the recovery of Borneo, and have no known grave. Subsequently it was found that a number of men belonging to the local forces of North Borneo, Sarawak and Brunei who were killed on war service also have no known grave, and they too are honoured here. Men of the Royal Australian Navy who lost their lives in the south-western Pacific region, and have no grave but the sea, are commemorated on Plymouth Naval Memorial in England, along with many of their comrades of the Royal Navy and of other Commonwealth Naval Forces.

This memorial consists of a colonnade forming a forecourt immediately inside the wrought iron gates of the main entrance to the cemetery. On the inner faces of the pillars are bronze panels on which are engraved the names of those whom it honours and the dedicatory inscription is on the frieze facing the entrance. Some of those whose names appear on the memorial are undoubtedly buried in unidentified graves in this cemetery. 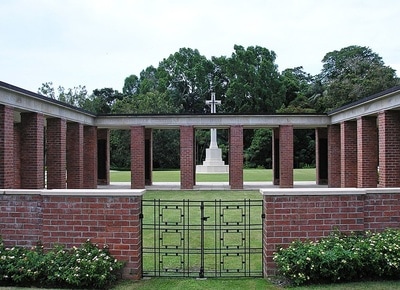 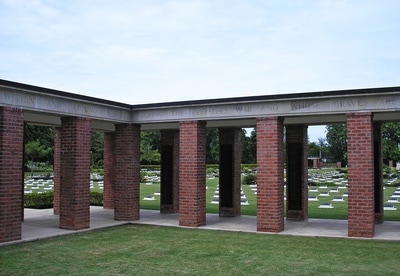 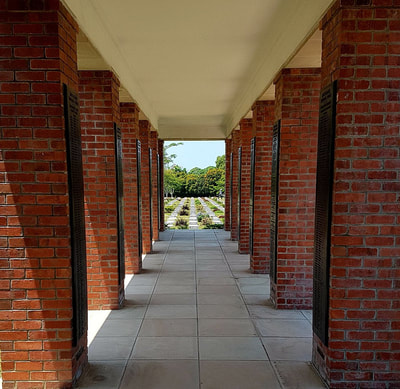 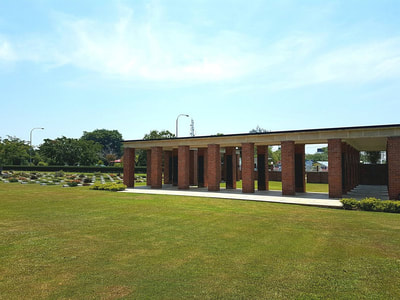 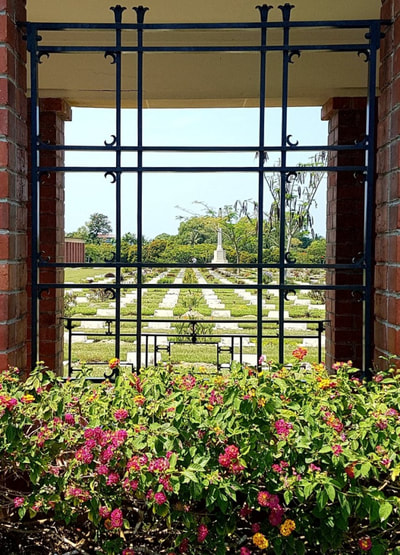 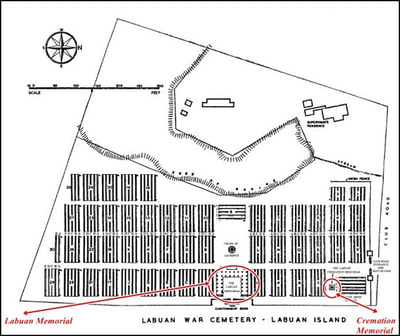 The Labuan Cremation Memorial commemorates 34 soldiers of the Indian Army who were killed during the fighting in Labuan or who died in Labuan while prisoners of war in Japanese hands, and were accorded the last rite required by their religion - committal to fire.

Standing immediately in front of the Indian Army plot in Labuan War Cemetery, it takes the form of a stone pylon with four faces, surmounted by an urn. 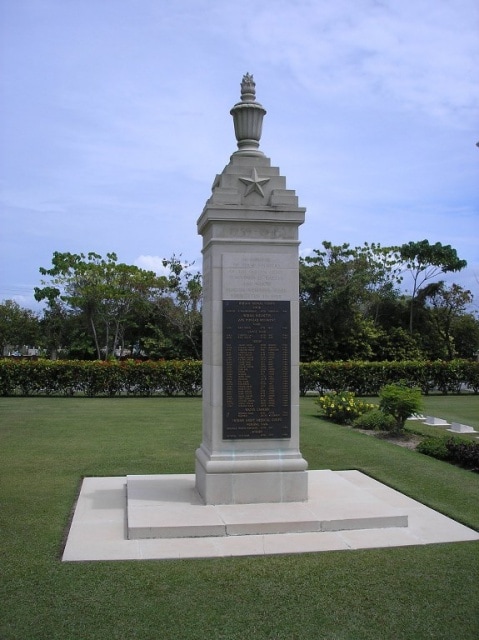