Benghazi is a seaport on the Mediterranean. The cemetery is about 7 kilometres south-east of Benghazi in the Fuihat area, about 300 metres from the childrens' hospital on the opposite side of the road.

From the city centre take the road following the coast past the sports stadium. Approximately 2 kilometres beyond the stadium is a large roundabout with a flyover on to the Tripoli road. Turn left at this roundabout, and the War Cemetery is found 3 kilometres along this road on the left hand side.

NB: Benghazi War Cemetery should not be confused with Benghazi British Military Cemetery passed after about 1 kilometre on the right side of the road.

NOTE: Following the attack on Benghazi War Cemetery in 2012, signficant progress has been made in reinstating the desecrated headstones and improving horticultural standards.

Given the current sensitive political situation in Libya, the CWGC strongly recommends that before considering a visit to Libya, you check the advice given by the Foreign & Commonwealth Office on the travel section of their website: www.fco.gov.uk/en/travel-and-living-abroad/travel-advice-by-country/

Benghazi was an important goal for both Allies and Axis forces during the Western Desert campaigns of 1942 and 1943.

There are now 1,214 Commonwealth servicemen of the Second World War buried or commemorated in Benghazi War Cemetery. 163 of the burials are unidentified. Special memorials commemorate two casualties buried in Barce War Cemetery, whose graves could not be located and three airmen who are known to be buried in this cemetery, but whose graves cannot now be identified. There are also 25 non Commonwealth burials here, 1 being an unidentified Greek soldier. 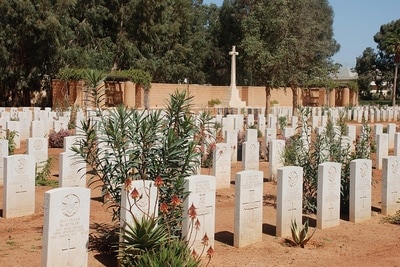 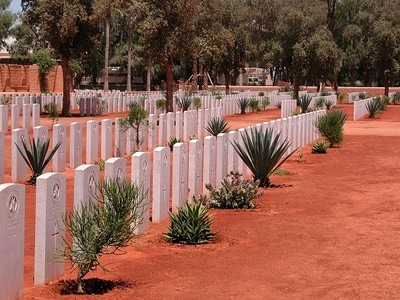 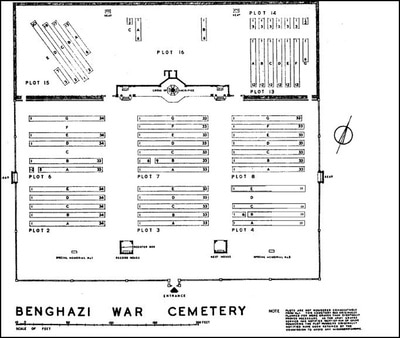 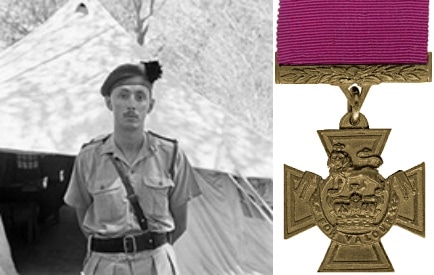 Citation: The citation in the London Gazette of the 19th June, 1942, gives the following details : Lieutenant-Colonel Keyes commanded a detachment of a force which landed some 250 miles behind the enemy lines, in North Africa, to attack Headquarters Base installations and communications. Lieutenant-Colonel Keyes deliberately selected the command of the party detailed to attack the residence and Headquarters of the General Officer commanding the German Forces in North Africa. This attack meant almost certain death for those who took part in it. The disposition of his detachment left him only one officer and a N.C.O. with whom to break into General Rommel's residence. On the night 17/18 November, 1941, he boldly led his party to the front door and demanded entrance. It was unfortunately necessary to shoot the sentry; the noise aroused the house, so that speed became of the first importance. Lieutenant-Colonel Keyes instinctively took the lead and emptied his revolver with great success into the first room. He then entered the second room but was mortally wounded almost immediately. By his fearless disregard of the dangers which he ran and of which he was fully aware, and by his magnificent leadership and outstanding gallantry Lieutenant Colonel Keyes set an example of supreme self-sacrifice and devotion to duty.