Le Crotoy is a village on the right bank of the Somme esturary and is 20 kilometres north-west of Abbeville. The Communal Cemetery is on the north-western side of Le Crotoy on the road to the beach and to the neighbouring hamlet of St Firmin. 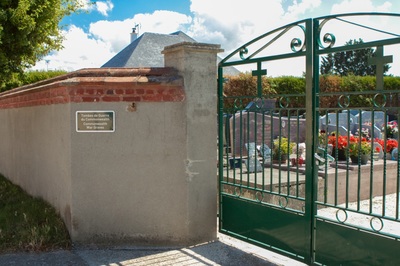 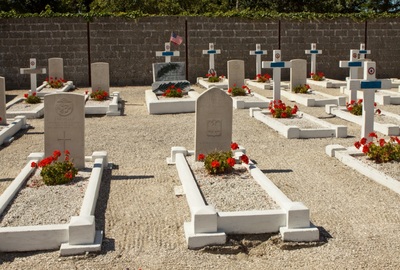 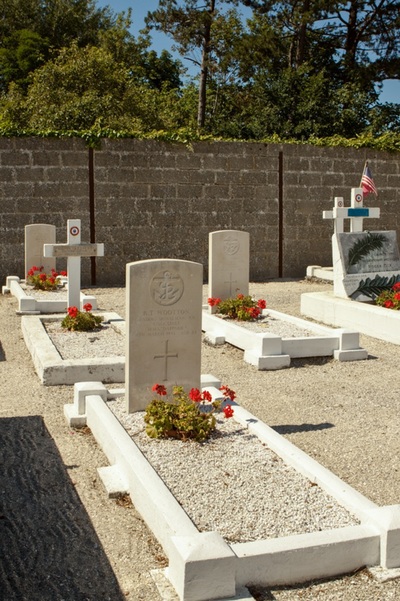 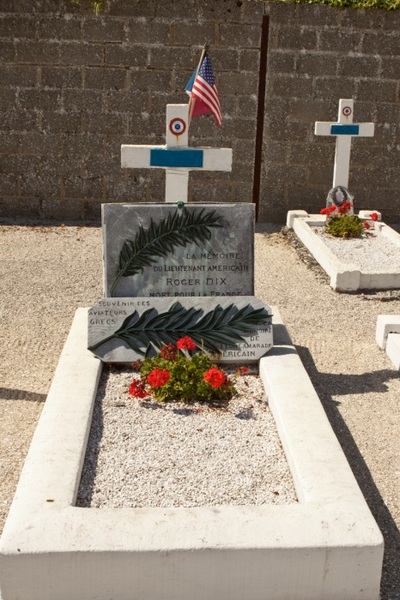 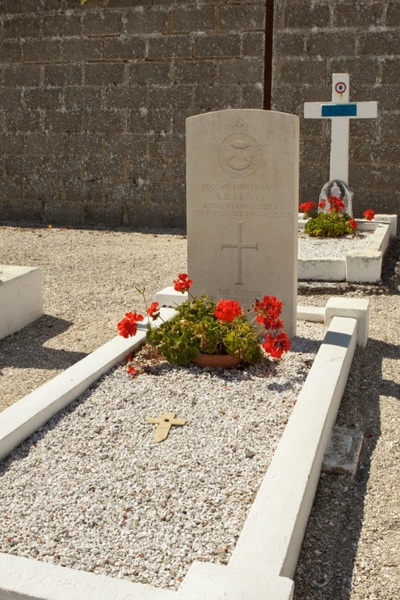 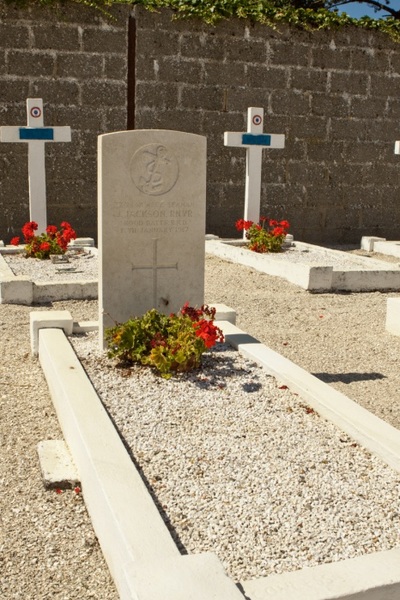 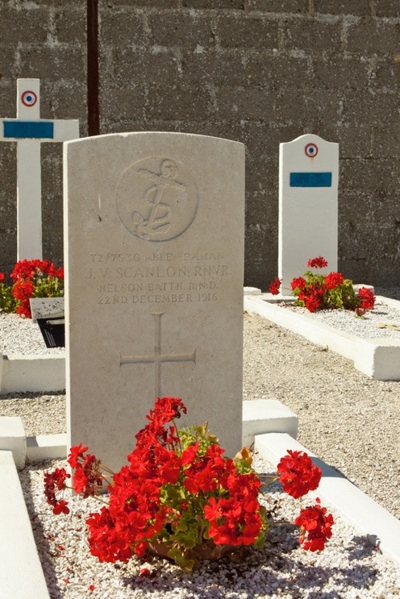 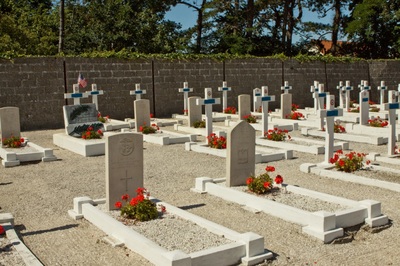 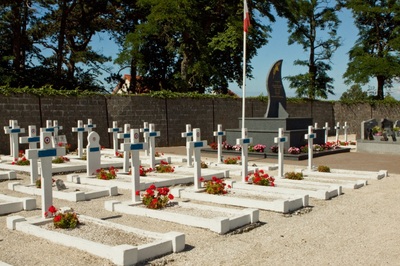 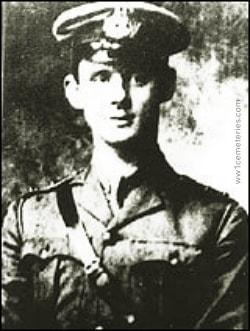 The well-educated son of a merchant navy captain, he volunteered for the Royal Navy in 1915, & was promptly commissioned into the Royal Naval Division & posted to the Nelson Battalion.

Just before dawn on 13 Nov 1916, the division attacked the German lines on the N bank of the R Ancre, near Hamel.  Dyett had been left out of the order of battle, kept as a part of a reserve of officers  & men for use if needed.  The attack broke down almost immediately & heavy casualties were taken.  Dyett & Lt Truscott were ordered to get up to the front line to find out what was happening.  They were the only 2 officers available according to Dyett’s CO — who was worried about Dyett going forward as he felt that ‘his authority in command over the men was not good’. (Dyett had previously asked for a transfer to sea service as he thought that he was not fitted for the firing line).

Nevertheless, the 2 officers went forward to the brigade HQ at Hamel where at about 1330 Truscott received orders from the Brigade commander (‘cast-iron’, applying to both officers) to join the battalion where it had been last heard of well inside the German front lines.  Together they went forward & reached the ruins of Beaucourt Station where they found Sub Lt Herring.  The latter ordered Truscott to take about 200 stragglers back up to the line, Dyett to accompany him.  He did not, & remained to argue with Herring, Dyett appearing to resent being given orders by him.  The upshot was that Dyett said that because of the chaos, he had better go back & report to the Brigade. That was Dyett’s purpose, as was said at trial by Herring, who had not viewed it as desertion — further adding that Dyett did not appear agitated or frightened.  However, another witness was to say that Dyett ‘looked as though he wanted to get out of it’.
Dyett did not report back to Brigade HQ on 13 Nov, nor the day following, nor did any other officer of the Nelson Battalion.  He was next seen on 15 Nov at the billets near Englebelmer (about 5 miles to the rear), where the battalion, having been relieved, returned after the 2 days of operations, during which Dyett had not been seen.  The Brigade commander, following report from Herring, sought an explanation from Dyett, found it unsatisfactory & placed him under arrest.

On 19 Dec 1916, Dyett was charged with desertion in that he failed to join his battalion on Nov 13, & remained absent until Dec 15. The trial was set for 26 Dec, when a Brigadier General presided over 4 other experienced officers.  A barrister Captain acted as Judge Advocate, the accused being represented by a solicitor Sub Lieutenant from another battalion in the Royal Naval Division.

Astonishingly, Dyett did not give evidence & no defence witness was called.  His advocate pointed out that Dyett was highly neurotic, feeling himself unfit to be an officer in the field, having made 4 separate applications for transfer into the Royal Navy or Royal Naval Reserve.  Further, he quoted the evidence of Dyett’s CO that Dyett ‘had begged to be kept at the base as he had no confidence in his powers of leadership’.  It was claimed on Dyett’s behalf that he had lost his way in the dark & had spent the night in a dugout; & also that he had returned to Brigade HQ for clarification of his instructions.  As the Judge Advocate stated in his summing-up to the officers trying Dyett: ‘The Accused did not report back to the brigade HQ’.

Conviction & sentence was accompanied by a recommendation to mercy on the grounds that Dyett was very young, with no experience of active operations, & likely to have been affected by the conditions of the battle.  The Divisional commander agreed, the Corps commander did not, while the Army commander wrote that: ‘If a Private had behaved as he did in such circumstances, it is highly probable that he would have been shot’.  Confirmation followed on 2 Jan 1917.  (Corns, pp 261-276)
​
See Putkowski, pp 150-155 (where a photo of Dyett is included) for much further controversial detail about the malice of the officer with whom Dyett had the altercation; about the poor standing of some of the witnesses called by the prosecution; about the failure to obtain the consent to execution from the Royal Navy that the law required; about the later reprisals attempted against Dyett’s defending officer; & possible subsequent cover-up at the War Office.
​ 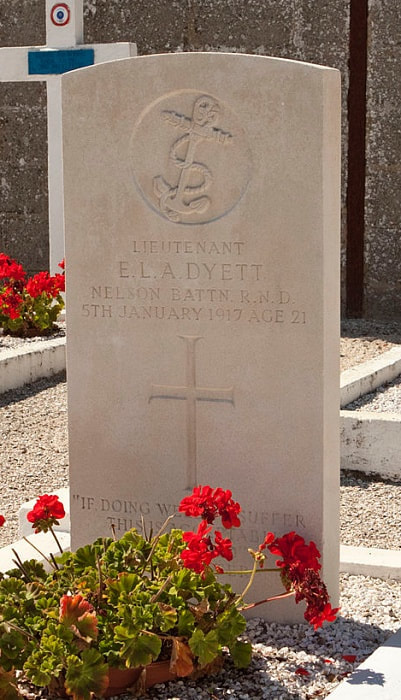 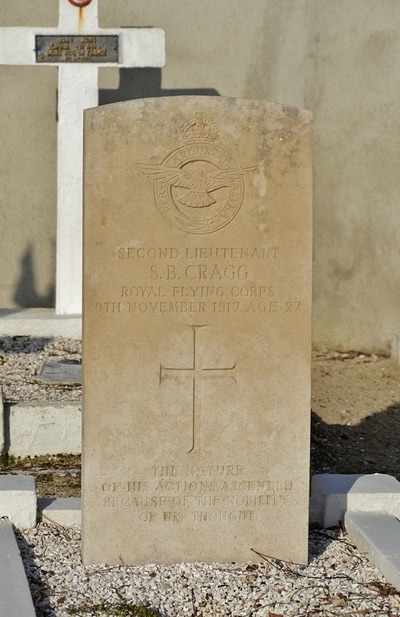 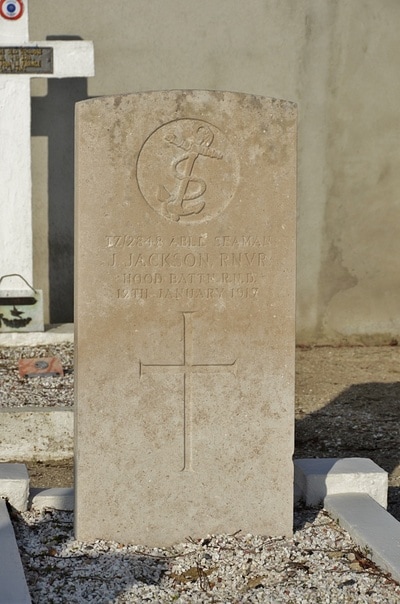 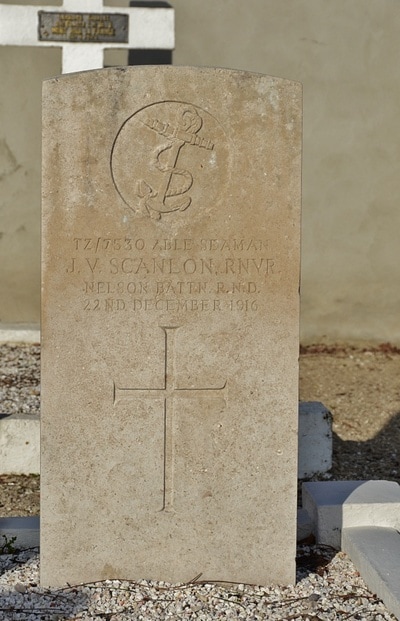 Other World War One Burials 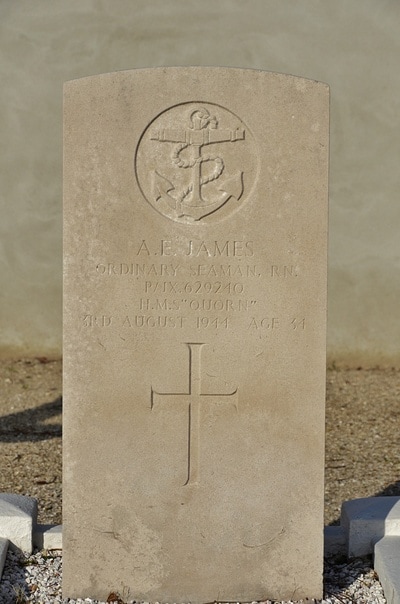 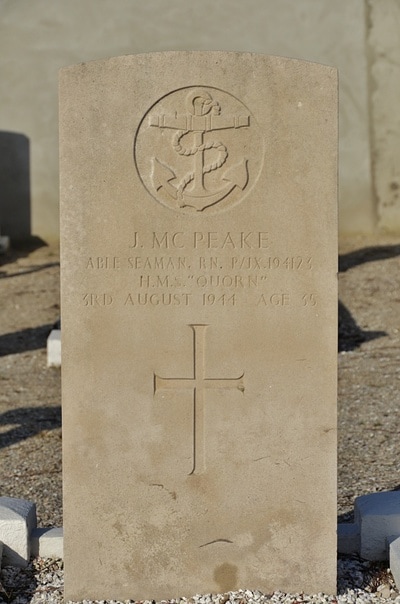 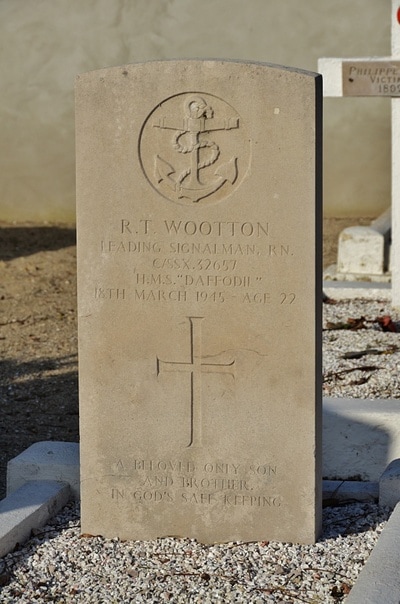 Porucznik (Pilot) Tadeusz Stabrowski’s son was only six-months-old when his father’s Spitfire was brought down by anti-aircraft fire on 11 March 1943.

Born on 16 May 1917 in Poland, Tadeusz  joined the Polish reserve air force as an Officer Cadet in 1935. Following the German invasion of Poland in 1939 he was taken prisoner and interned in Romania, but managed to escape after securing a false passport. He made his way to France and then England – arriving in June 1940. He trained at RAF Aston Down and was posted to 258 Squadron. While in England he married and had a son. Tadeusz was later posted to 308 (City of Krakow) Squadron operating Spitfires.

A fellow pilot, Tadeusz Schiele described him as “a loveable drunk and crazy artist-painter. On the ground he was humble, unkempt, constantly blinking, reckless, always late, absentminded and in disregard of everyone and everything. In the air he became a calm, precise and brave pilot with nerves of steel and one of the best I have ever known.”

Tadeusz’s son and his family travelled from Canada to attend the moving service in Le Crotoy Communal Cemetery on Sunday (11 March). The service was organised by the Polish authorities, and the Commission provided the new headstone inscribed with his name.

Tadeusz was last seen ditching his Spitfire in the Channel and although it was reported that he escaped his sinking aircraft, a rescue seaplane found no trace and it is presumed he died of hypothermia. His body washed ashore in April 1943 and was buried as an Unknown Polish Airman in Le Crotoy Communal Cemetery.

In September 2017, following a request by the Polish Department of Cultural Heritage and Wartime Losses, experts from Pomeranian Medical University carried out an investigation into the identity of the Unknown Polish Airman in Le Crotoy.
​
Their investigation, which included DNA comparison, confirmed the identification of the previously unknown airman as Flying Officer Stabrowski. 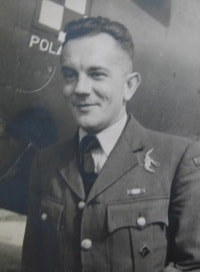 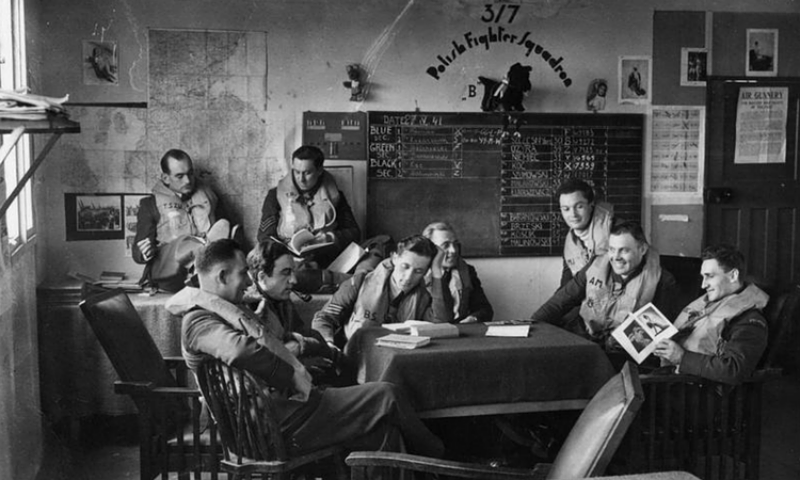 Photo caption: Pilots of No. 317 Polish Fighter Squadron enjoying a break in the Operation Room of RAF Ouston, 27 April 1941. F/O Tadeusz Stabrowski  is pictured in the left foreground, in the chair. © IWM (HU 128889)

The son and grandchildren of a Second World War pilot previously buried as an ‘Unknown Polish Airmen’ attended a rededication service at his grave on the 75th anniversary of his death. 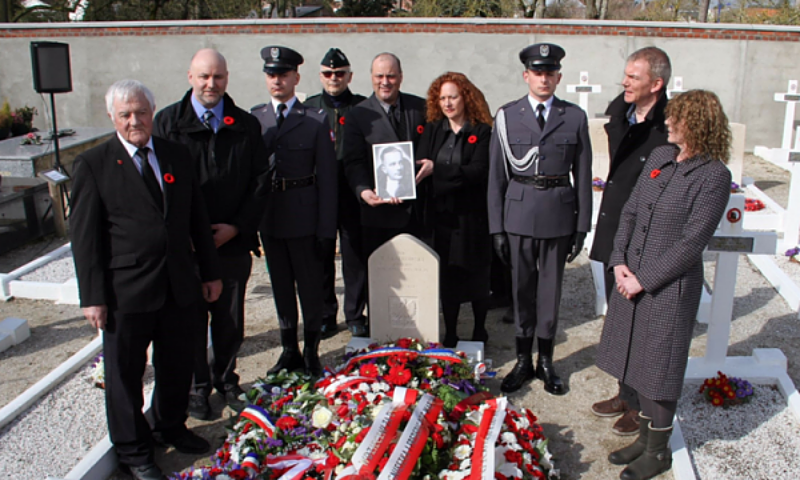 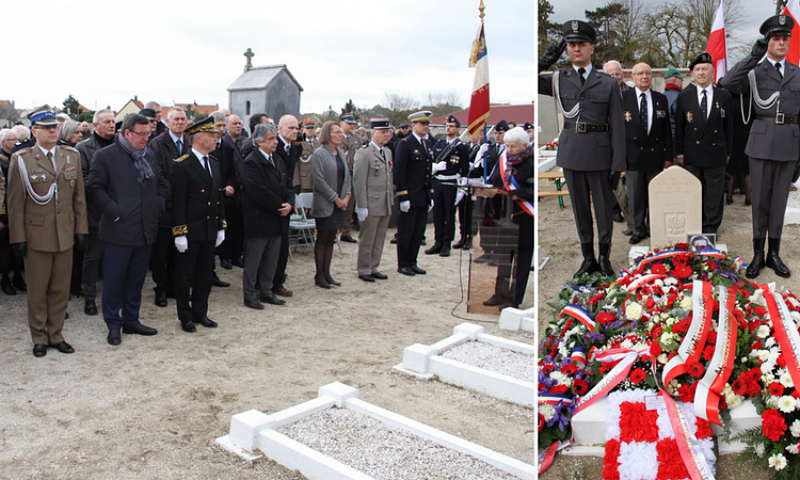 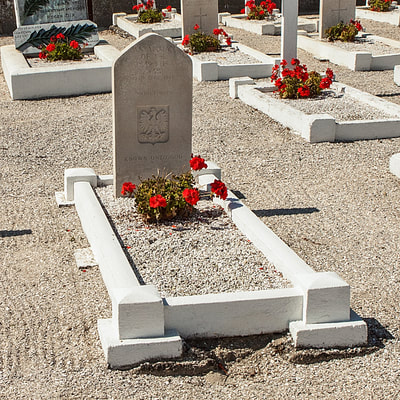