Lanvéoc is a coastal village and commune about 20 miles (32 kilometres) by road north-west of Chateaulin which is on a branch railway line from Quimper. From Chateaulin there is another line to Crozon, whence a taxi completes the journey (about 2 miles) to Lanveoc. The village is on a secondary road which runs inland some 2 miles (3 kilometres) to join the main Crozon-Chateaulin road. The communal cemetery lies on the south-eastern side of the village some 50 yards from the church. Close to the boundary wall on the far right of the entrance are the graves of three airmen of the Royal Air Force, four airmen of the Royal Australian Air Force and one Polish airman. 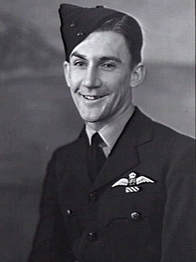