The town of Celle lies in the north of Germany approx 40kms north east of Hannover.

From the A7 motorway Hannover to Hamburg take exit 56 (Ausfahrt 56) CELLE and follow the B3 direction CELLE. Continue along the B3 following the signs for SOLTAU for approx 29kms passing through the town of Celle.
From the HARBURGERSTRASSE turn right onto IM ROLANDE (CWGC sign) and the cemetery can be found after 100m on the left.

Visitors should note that the cemetery is located next to a military base with security cameras and any photography should be taken with this in consideration.

Celle War Cemetery was the hospital cemetery of the 64th British Military Hospital and those buried here were mainly servicemen who died of wounds sustained during the last month or so of the war. 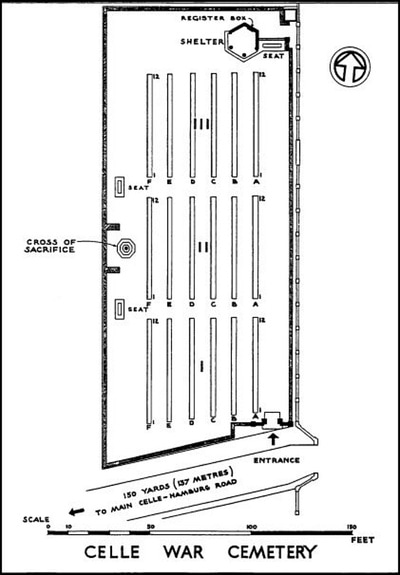