Fredericia is a town on the east coast of Jutland 88 kilometres by rail east of Esbjerg, and about 5 kilometres from the road-rail bridge connecting Jutland with the island of Fyn. From the E20 turn off at Junction 59 and follow the signs to the town centre. Follow the road onto the Indrering and then turn left at traffic lights along Egeskoves towards Vejle, then turn right into Christiansveg. The cemetery is along here next to the church on the right. From the car park walk to the front of the chapel and turn right towards the gates at end of first plot. In front of the roundabout turn left where the three graves surrounded by a Rhododendron hedge can be seen 100m along the path on the right hand side.

Fredericia Northern Churchyard contains the graves of three Commonwealth airmen, one of them unidentified.

No. of Identified Casualties: 2 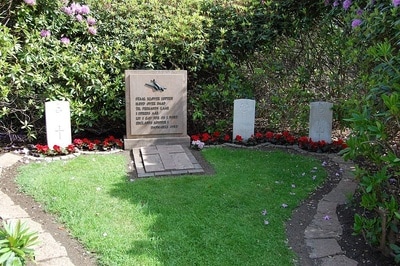