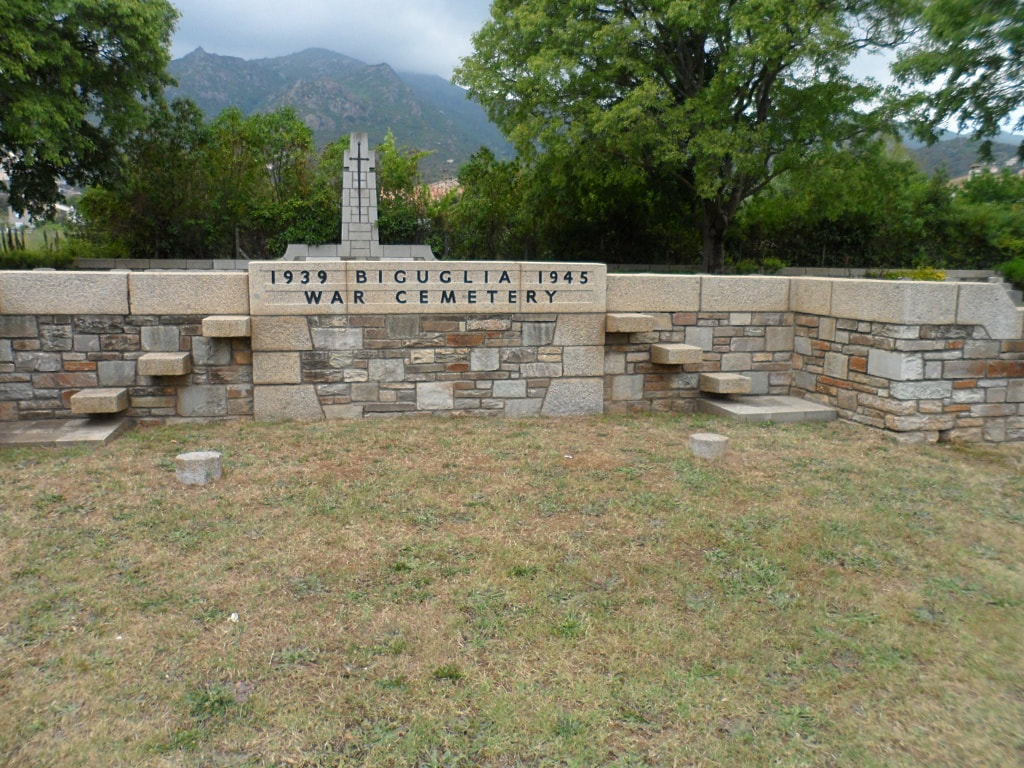 Biguglia is a small village 9 kilometres south of Bastia, which is a town and sub-prefecture of the department of Corsica, situated on the sea coast north-east of the island. The cemetery lies seven kilometres south of Bastia on Route Impériale some 275 metres west of the N193, the main Bastia-Biguglia-Ajaccio road. Along the very busy dual carriageway there is a roundabout with signs to the "Commonwealth War Cemetery".

Care needs to be taken when entering the site as access to the cemetery is via a series of external wall mounted steps. The design of this site makes wheel chair access impossible. 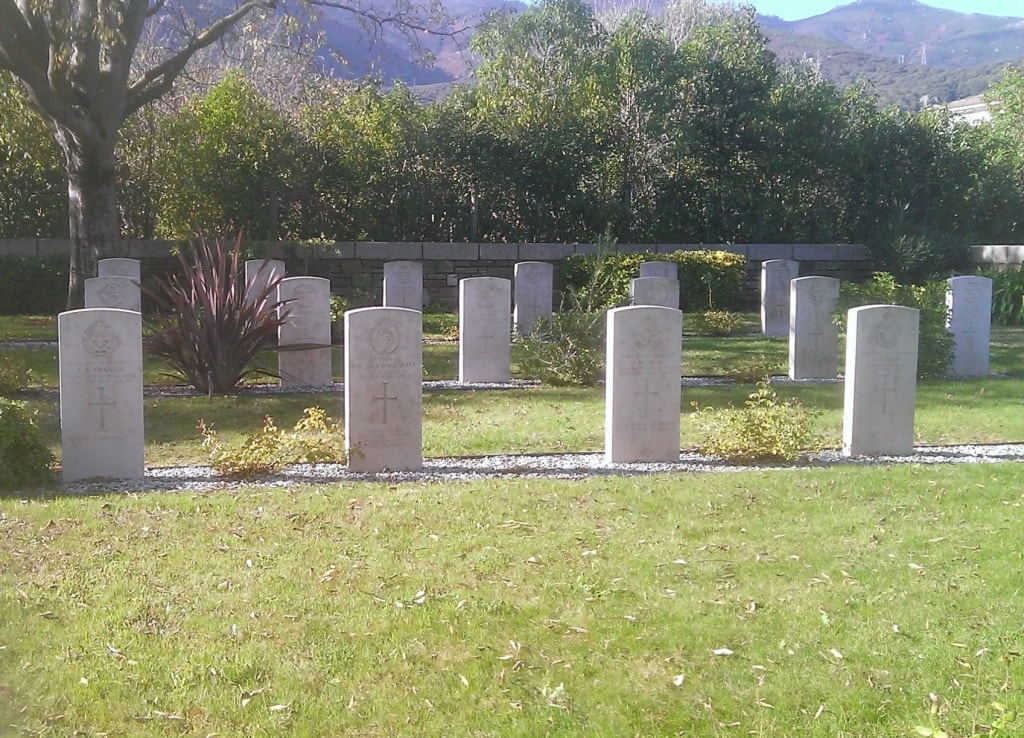 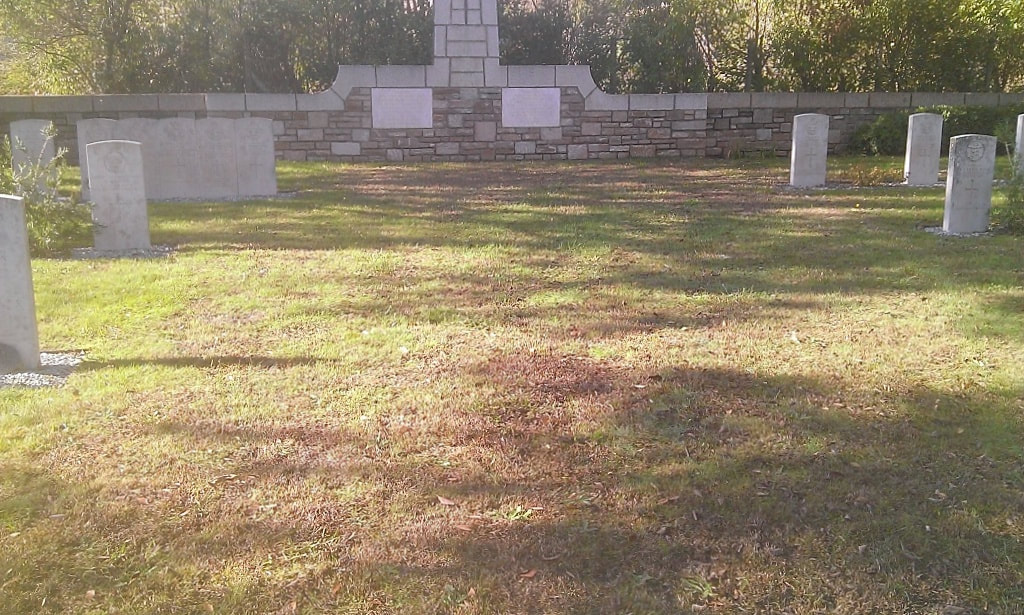 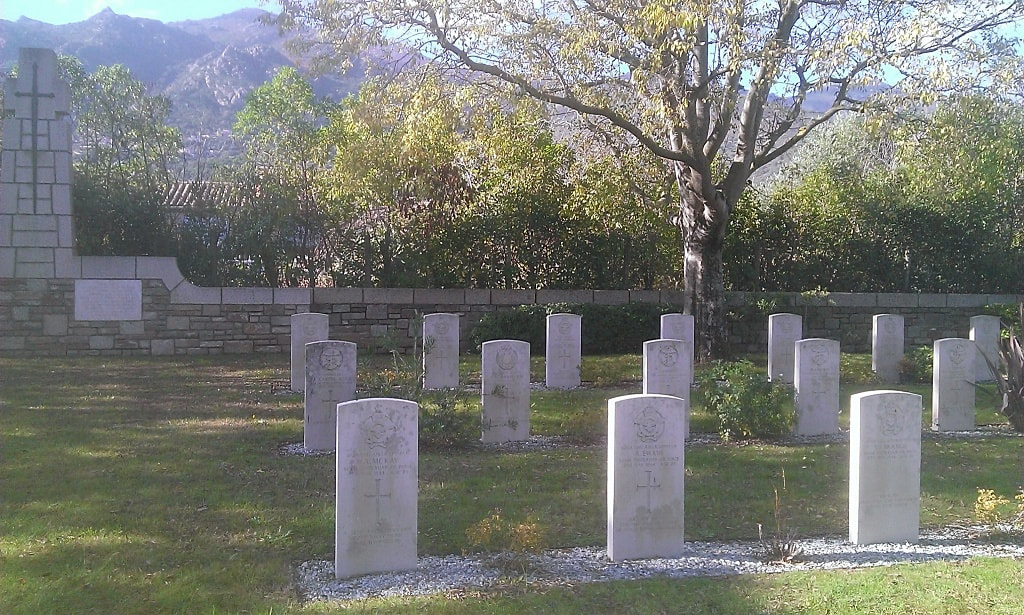 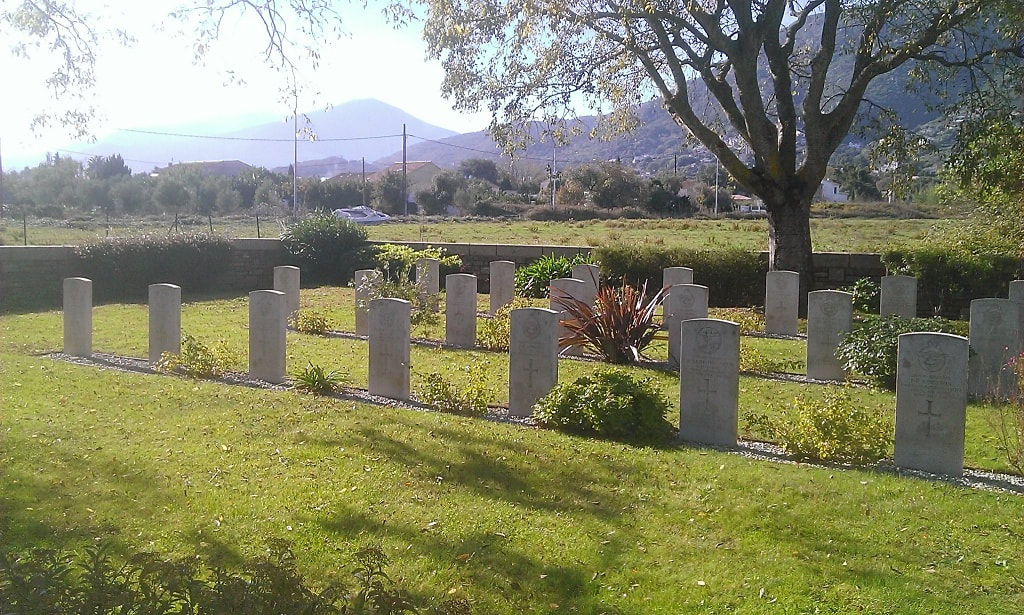 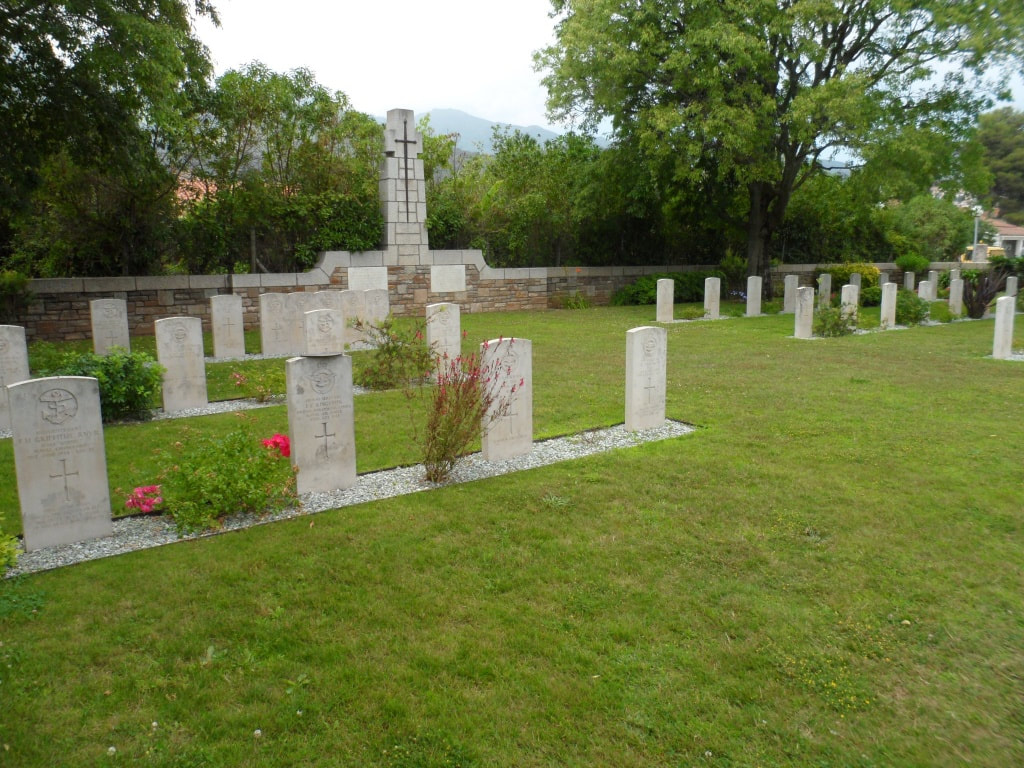 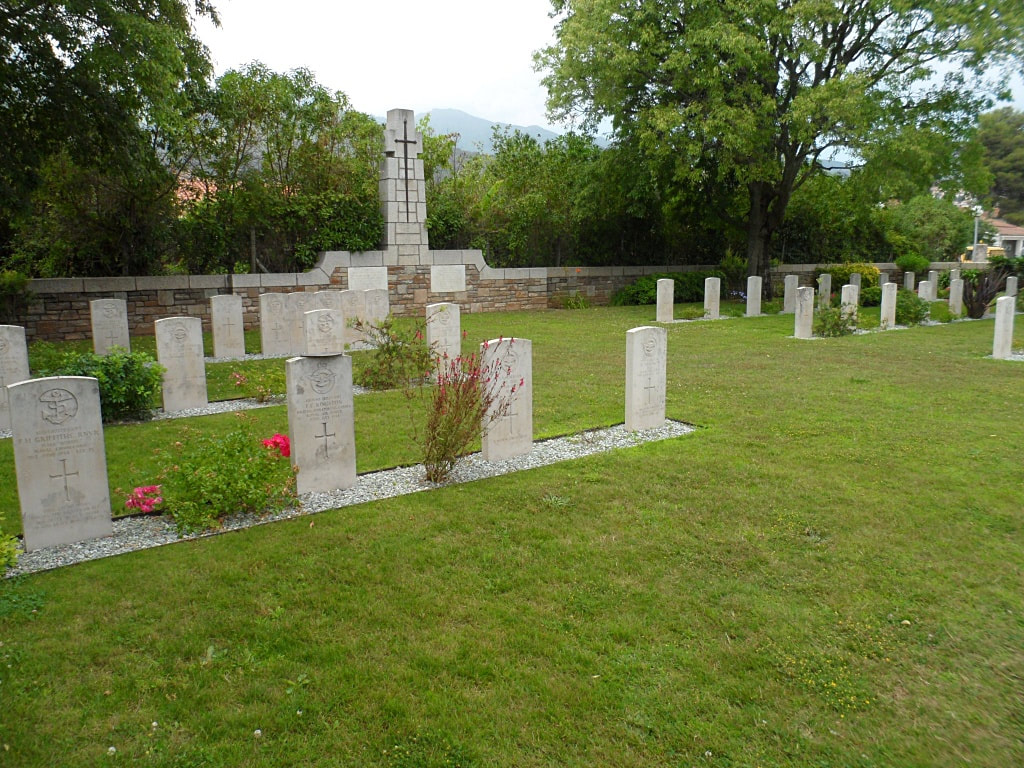 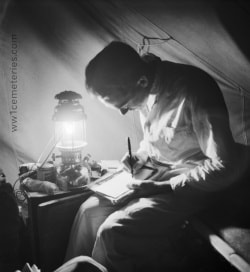 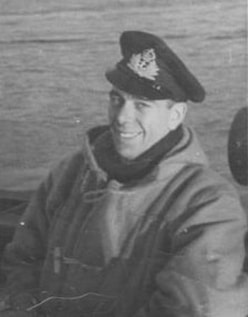 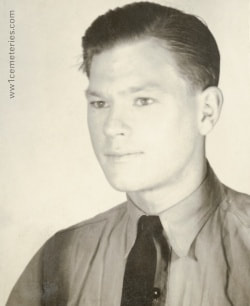 His headstone bears the inscription "His Duty Fearlessly And Nobly Done"

Studio portrait of 412922 Leading Aircraftman (LAC) Kenneth Dear, of Cootamundra, NSW. A salesman prior to enlisting on 15 August 1941, he completed his initial training and progressed to the Advanced Training Course for pilots at No. 7 Service Flying Training School (7SFTS), RAAF Station Deniliquin, Australia. Sergeant (Sgt) Dear embarked from Sydney in August 1942 to take up duty with the RAF. In June 1943, he was attached to No. 253 Squadron, RAF which was operating Supermarine Spitfire aircraft in North Africa. In February 1944. the Squadron moved to Corsica to fly bomber escort and anti-submarine missions over Italy and the south of France. Warrant Officer (WO) Dear was killed in a flying accident in Corsica on 16 April 1944 aged 21. He is buried in the Biguglia War Cemetery, Corsica, France. 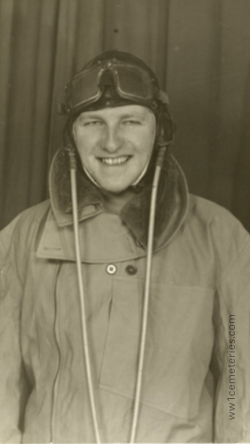 Portrait of 424162 Sergeant (Sgt) Maxwell Dunbar RAAF, wearing a Sidcot training suit,a leather helmet fitted with Gosport speaking tubes and goggles. Sgt Dunbar, a postal clerk from Dubbo NSW, enlisted in 1942 and trained in NSW. He qualified as an air gunner and in early 1944 he was posted to 630 Squadron RAF (Lancaster bombers) in England. On the night of 24 April 1944 his aircraft was severely damaged during a raid on Munich and the pilot tried to fly to the safe haven of neutral Switzerland. Unable to climb high enough to fly over the Alps they headed south, aiming for the US airbase at Borgo on the island of Corsica. On the morning of 25 April, on its final landing approach, the two remaining engines cut out and the aircraft crash landed. Six of the crew were saved but the newly promoted Flight Sergeant Dunbar, the rear gunner, died aged 21. 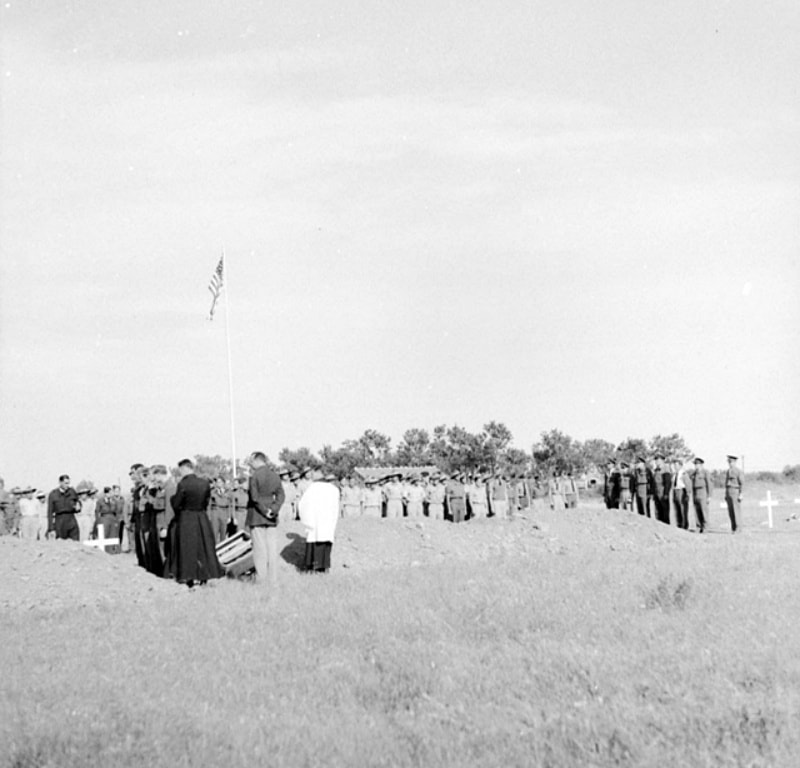 The funeral services at the Bastia Military cemetery, Corsica, for Royal Australian Air Force airmen, 11963 Leading Aircraftman (LAC) Harold Alexander McKay (Details below) and 30550 Leading Aircraftman Clarence Arthur Conrad, who died on 13 May 1944 of wounds received in a German air raid on their camp at Poretta airfield on 12 May 1944. Members of No. 451 (Spitfire) Squadron RAAF, pay their last respects at the graveside burial service, officiated by RAAF Padre (Wing Commander) James Frederick McKay.

30550 Leading Aircraftman Clarence Arthur Conrad was 22 years old and is buried in plot 2. A. 5. Son of Ernest Walter and Ellen Mary Conrad, of North Hobart, Tasmania. His headstone bears the inscription "Ever Remembered" 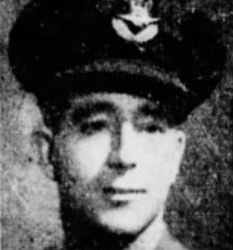 Son of Martin and Elsie McDermott, of Winnipeg, Manitoba, Canada.

His inscription "And While He Lies In Peaceful Sleep, His Memory We Shall Always Keep" 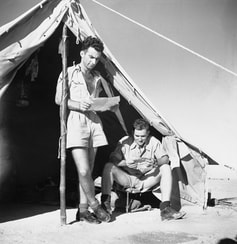 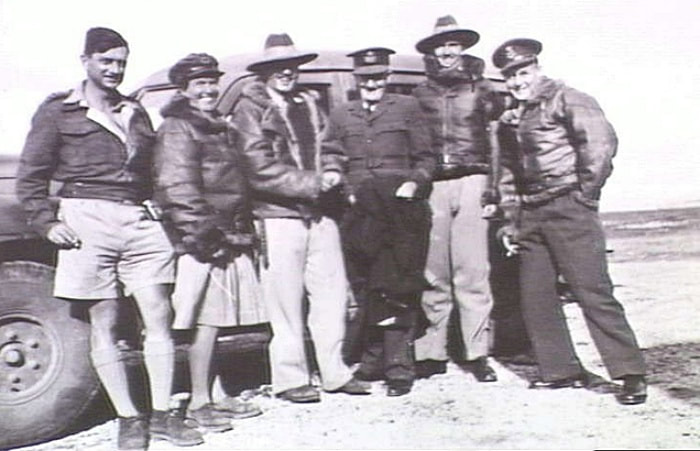 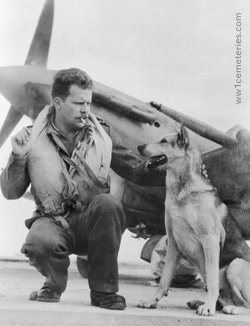 His headstone bears the inscription "The Supreme Sacrifice"

Flying Officer (later Flight Lieutenant [Fl Lt]) 408177 John Duncan Ward, 451 Squadron RAAF of Burnie, Tasmania, has a man to man talk with 'Hurry' (short for Hurricane, the type of aircraft the squadron used to fly), pet dog and mascot of the RAAF Spitfire squadron, now based in the Middle East. The squadron first made the acquaintance of 'Hurry' in Cyprus. Nowadays 'Hurry' is the proud and haughty wearer of the honorary rank of Sergeant bestowed on him some months ago for exemplary conduct. On 17 May 1944 FO Ward died of wounds received in an air raid in Corsica on 12 May 1944.