The Cemetery lies in the Commune of Argenta in the Province of Ferrara and the town of Argenta is 2 kilometres south of the cemetery on the SS16 connecting Ravenna with Ferrara.

Coming from Ravenna:
-continue along the SS 16 towards Ferrara until you pass the centre of Argenta. Follow the signs to Bando and turn right on Strada di Sant'Antonio. Then follow the indication below.

Coming from Ferrara:
-continue along the SS16 towards Ravenna and turn left in Strada di Sant'Antonio, the first street of the village of Argenta following the signs to Bando. Then follow the indication below.

Coming from Bologna:
-continue along SP38 until the intersection with SS16. Turn left in SS16 towards Ferrara until you pass the centre of Argenta. Follow the signs to Bando and turn right on Strada di Sant'Antonio. Then follow the indication below.

At the roundabout go right. This road continuing takes the name of via del Fitto. Follow the signs to Bando until the turn left into via Alberelli. Go ahead and take the first right into via Fritelline then take the first on the right, via Piangipane. The cemetery is located at the end of the private path to the right.

This cemetery is permanently open and may be visited at any time.

Please note that the main entrance is some 800 metres away from the nearest road. The track from the road to the cemetery entrance runs over private land on which the landowner has placed a barrier across the track. The barrier is usually unlocked between 08.00 and 19.30. Should the barrier be locked at the time of your visit, the combination lock number is 1221.

The final Allied offensive begain early the following April and Argenta Gap War Cemetery marks the final stages of the hard fighting in Italy in the spring of 1945. The site of the cemetery was chosen by the 78th Division for battlefield burials, and it was later enlarged when burials were brought in from the surrounding district. It contains, among others, the graves of many men of the Commandos engaged in the amphibious operations on the shores of the Comacchio lagoon early in April 1945. 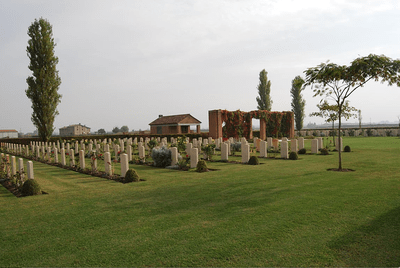 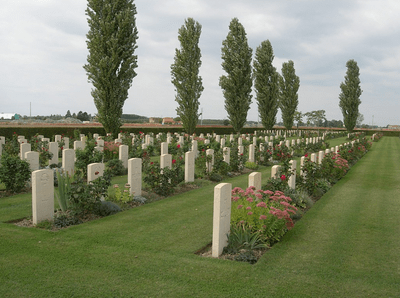 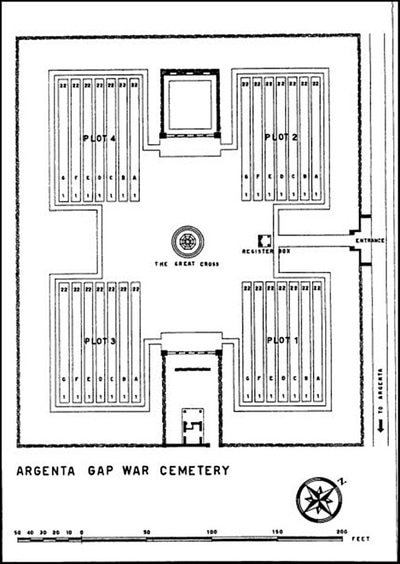 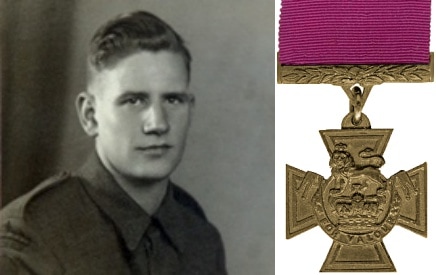 Son of Ramsay and Mary Hunter, of Edinburgh.

Citation: The London Gazette of 13th June, 1945, gives the following details: In Italy Corporal Hunter of "C" Troop of a Royal Marine Commando was in charge of a Bren group of the leading sub-section. Having advanced to within 400 yards of the final objective he realised that his troop had to cross open ground where enemy fire would cause heavy casualties. Corporal Hunter seized the Bren gun and charged across 200 yards of open ground, attracting most of the enemy fire. Showing complete disregard for this fire he alone cleared the enemy position, capturing six Germans. The remainder fled over the canal. The troop now became the target for fire from the opposite bank. In full view, Corporal Hunter fired and drew most of the enemy fire while the greater part of the troop gained cover. Shouting encouragement to the remainder he continued firing with great accuracy until finally he was hit and killed. There can be no doubt that Corporal Hunter offered himself as a target in order to save his troop. By the skilful and accurate use of his Bren gun he demoralised the enemy, and later silenced many of the Spandaus firing on his troop, so that many of the troop made their final objective before he was killed. Throughout the operation his magnificent courage, leadership and cheerfulness had been an inspiration to his comrades. 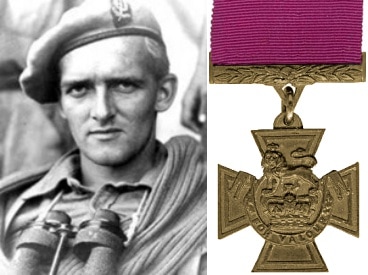 
Citation: The London Gazette of 4th September, 1945, gives the following particulars: In Italy, on the night of 8th/9th April, 1945, Major Lassen was ordered to take out a patrol and raid the north shore of Lake Comacchio. His task was to cause casualties, capture prisoners and give the impression of a major landing. The patrol was challenged and came under machine-gun fire. Major Lassen himself attacked with grenades and silenced two enemy posts, capturing two prisoners and killing several Germans. The patrol had suffered casualties and was still under fire. Major Lassen moved forward and flung more grenades into a third enemy position, calling upon the enemy to surrender. He was then hit and mortally wounded, but whilst falling he flung a grenade, wounding more of the enemy and enabling his patrol to capture this last position. Finally, he refused to be evacuated lest he should impede the withdrawal and endanger further lives. His high sense of devotion to duty and the esteem in which he was held by the men he led, added to his own magnificent courage, enabled Major Lassen to carry out with complete success all the tasks he had been given.